Who Can Challenge The Thunder Out West?

Here are my power rankings as of today April 10. Enjoy!

Are The Orlando Magic Done? 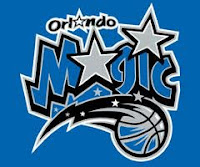 The Orlando Magic just had one of the most dramatic weeks in recent NBA history. Stan Van Gundy opened a can of worms by saying that Dwight Howard had asked for him to be fired. He said management had told him this, but that he wasn't at all worried and only cared about winning basketball games. But this didn't stop the media from going into a frenzy. Kendall Gill had some interesting things to say Friday Night on NBA Game Time regarding the drama in Orlando. He compared Dwight Howard asking for Stan Van Gundy to be fired to a situation that happened to the 1994 Seattle Supersonic team that he played on. If you guys know your NBA History, you know that in 1994, the 8 seeded Denver Nuggets upset the 1 seeded Seattle Supersonics in the first round of playoffs, the first time an 8 seed ever beat a 1 seed in NBA history. The Sonics were expected to win the west as well as the championship, but they fell way short after losing in the first round of the playoffs. Kendall Gill says the reason they lost that series was due to an argument that Ricky Pierce and Gary Payton in game 1 of that series. Gill said that the argument divided the team, and was a big reason they lost that series. He feels that this Dwight Howard/Stan Van Gundy drama will have the same affect on the Magic, and he went so far as to say the Magic are "Done", and will not be a factor come playoffs. Gill's words are strong, and come with a lot of weight behind them. But are the Magic really done? Well, it appears as though Gill may be right. The Magic are currently 6th in the East and 10 games out of first place. They just got thumped by the Knicks who are also full of problems, and have had recent losses against the Pistons and Nuggets. Two teams who aren't going anywhere. But I guess to more definitively answer the question about whether or not the Magic are done I'll define what "done" means. If "done" means out of the playoff mix, then the answer is obviously no. They will still make the playoffs, and likely avoid the Bulls and Heat in the first round, which means they can still maybe win a first round series. If by "done" you mean they aren't winning the championship this season, then by all means, yes they are done. The Magic will not come close to winning a championship this season. They may win a series, they may have a close series in the 2nd round, but they won't advance to conference finals and certainly not the NBA finals. Even if you take all this drama out of the equation and just look at them from a pure basketball sense, it is clear that they aren't going to win the title. Dwight Howard is not the same force that Shaquille O'Neal was in his prime. Shaq averaged 29.3 points per game twice in his early days in Orlando, and 29.7 points per game later on with the Lakers. Dwight Howard averages 20. That's a solid scoring average,but he is nowhere near the same level of scoring production that Shaq was, and he is nowhere near the player that Shaquille O'Neal was as a whole. So the whole Shaq/Dwight Howard comparisons just need to stop. Secondly, Dwight Howard doesn't have anybody else really really good around him. Ryan Anderson is having a breakout season, but he's not good enough to propel them to a title. Jason Richardson is on the back end of his career, and Jameer Nelson just isn't all that good. So in short, if you look at the Magic from just a pure basketball perspective, it's clear they aren't cut to win a title. But then when you throw all this drama into the mix, then it makes things even worse, and really sinks the team. Sorry to break it to you Orlando Fans, but your team is "DONE". Better luck next season, and hope your team makes a big signing over the summer. Maybe you nab Steve Nash? Who knows, but for the time being just hope your team can win a series, and not totally explode at the end of the season. At this point, all that Orlando fans can really hope for is that their team doesn't totally detonate and explode making things even worse at the start of next season.
Posted by Ben Parker at 1:01 AM No comments: