Why Dwight Howard Is Over-Rated 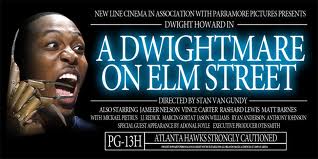 Dwight Howard is considered by many to be the most dominant force in the NBA. Standing at 6'11 and weighing 265 lbs, Dwight Howard's body acts like a brick wall to many who coming flying towards the rim. Thanks to his freakish build that you'd only expect to see in video games, Dwight Howard has convinced many people that he is indeed Superman and that he is rightfully the most coveted player in the game today.
But if you strip away the Superman cape, get past his frightening frame, and look to his stats, you realize he isn't nearly as good as we all like to think he is. Dwight Howard's numbers are solid, and I mean that in a good way. He averaged 20.6 points and 14.5 rebounds per game last season along with a shade over 2 blocks per contest. Those numbers tell us he is the best center in the NBA by a long shot. But if you start to compare him to great NBA centers who came before him, it becomes clear he has a ways to go before he can truly be considered a great center.
Last season, at the age of 26, Dwight Howard averaged 20.6 points, 14.5 rebounds, and 2.2 blocks per game. Those numbers look really solid until you stack it up to Kareem Abdul-Jabbar at the age of 26. When Kareem was 26, he averaged 27.0 points, 14.5 rebounds, and 3.5 blocks per game.  A 26 year old Kareem eats Dwight Howard for lunch. You think maybe Kareem had inflated stats do to weaker competition? Well, lets compare Dwight Howard to Patrick Ewing when Ewing was 26 years old. When Ewing was 26 years old, he averaged 22.7 points per game, 9.3 rebounds, and 3.5 blocks per game. Comparing stat lines, it's a toss up between Ewing and Howard if you ask me. Ewing scored a little more, and blocked more shots. Next, let's compare Dwight Howard to Hakeem Olajuwon, who Dwight Howard could use some coaching from (especially if he gets traded to Houston). When Olajuwon was 26 years old, he averaged 24.8 points per game, 13.5 rebounds, and 3.4 blocks. Olajuwon easily wins that battle. At 26 years of age, Hakeem Olajuwon was a vastly superior center to Dwight Howard. He was a better scorer, an almost equal rebounder, and a better shot blocker. At the age of 26, David Robinson averaged 23.2 points, 12.2 rebounds, and 4.5 blocks, and he was only in his 3rd year in the league!  Finally, lets compare Dwight Howard at the age of 26 to  Shaquille O'Neal at the age of 26. At the age of 26, Shaquille O'Neal averaged 26.3 points, 10.7 rebounds, and 1.7 blocks. That doesn't look like Shaq was all that much better. But wait, this wasn't Shaq's best stat line up to this point of his career. His best stat line came in Orlando when he was 21 years old! When Shaq was 21, he averaged 29.3 points, 13.2 rebounds, and 2.9 blocks per game. So, the Superman cape really does need to come off!
After analyzing their stats, it can't even be debated whether or not Dwight Howard is as good as these players were at his age. They were all vastly better, and mostly on the offensive end. These guys had better moves, better touch, and a better knack for putting the ball in the hole. If Dwight Howard wants to take a big leap forward in his development, it has to be on the offensive end. Right now, Dwight Howard is not that polished of a center and not very offensively assertive. No matter how many rebounds and blocks he gets, he won't become a championship caliber center until he can score in the same range as Shaq, Kareem, Ewing, and Hakeem. Not only that, but at this age, he needs to be entering the prime of his career, having the very best years at ages 27-30. Instead of developing his game and getting better, he seems to be caught up in his own ego and indecision about where he wants to play next. 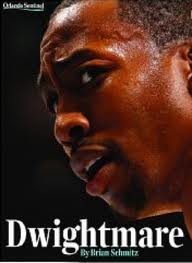 (image from: dimemag.com)
So, to answer my question, is Dwight Howard over-rated? The answer is yes. The reason is because if you compare him to the greatest centers in recent NBA history, he isn't nearly as good as them. Not only that, but Dwight Howard also has a much bigger ego than these guys all had, and he seems much less focused. Let's not forget that Dwight Howard at the age of 26 is more NBA experienced than any of these guys were at the same age. All these other players played at least a year or two in college.  Dwight Howard really should have numbers as good as these guys by now since he came directly from high school!
The fuss over Dwight Howard seems ridiculous if you look at him in comparison to any of the players that I just compared him to. He's a really good player, and is the best center in the NBA. But unlike the hall of fame players that I just mentioned earlier, he isn't a franchise changing center. Orlando couldn't win a title with him as the center piece, and until he improves his offense, I would have to say that I don't see him leading a team to a title outside of Orlando. If people stop to look at the numbers, and compare him to great centers of former years, it becomes clear that Dwight Howard just isn't worth nearly as much as we all think he is.