Painful Re-Boot Ahead In Philadelphia 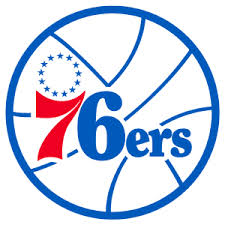 During the 2011-12 NBA season, the Philadelphia 76ers had one of the more exciting and promising teams in the NBA with swingman Andre Iguodala, guard Jrue Holiday, and guard Lou Williams as their nucleus along with power forward Thaddeus Young. They weren't a team with one definitive star, but rather a team made up of young athletic players who loved to run the fast break and score easy buckets in transition due to their defense, which was one of the top five defenses in the entire NBA. They ended up finishing 8th in the Eastern Conference that season, but thanks to Bulls point guard Derrick Rose tearing his ACL, they got out of the first round before being knocked out of the playoffs by the Boston Celtics. At the end of that season, everybody who followed the NBA believed that the 76ers were a team that was going to be competitive for a very long time. They were yet to show that they were serious contenders for a championship, but the pieces were there to work with, and that for 76ers fans was very exciting. 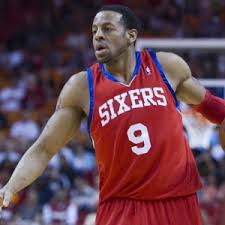 (image from docsports.com)
In the summer of 2012 after that season ended, the Philadelphia 76ers tried to capitalize on their young nucleus of talent and turn it into a contender right away by trading away small forward Andre Iguodala to the Denver Nuggets in a four way trade with the Magic, Nuggets, and Lakers that sent Dwight Howard to the Lakers and Andrew Bynum from the Lakers to the 76ers. I'll spare you the nitty gritty details of that trade, but it is suffice to say that the 76ers gave up their best player Andre Iguodala to land Andrew Bynum who at the time was one of the most promising young centers in the NBA. The one problem with Andrew Bynum was that he had a history of being hurt, but at the time, the 76ers were confident he would play for them that upcoming season, and also were confident that they could convince him to stay in Philadelphia long term. 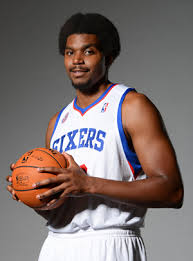 Well, it's been a year since that trade went down and Andrew Bynum has not played a single minute for the Philadelphia 76ers. He had plenty of time to grow a wild Afro and go bowling, but he was never healthy enough to see one minute of playing time during the 2012-13 NBA season. To make things worse, he isn't with the team anymore, and he is now the potential headache of the Cleveland Cavaliers, who gave him a softball offer of $6M guaranteed over two seasons with as much as $24M total should he play and stay healthy. In addition to losing Bynum and Iguodala as a result of getting Bynum, the 76ers no longer have Lou Williams, Jrue Holiday, or young promising center Nikola Vucevic (who was traded to Orlando as part of the Bynum deal).  In addition to losing all those players, the team also is no longer coached by Doug Collins, who stopped coaching the team back in April at season's end. As for finding his replacement, the 76ers are more than three months into their head coaching search, and they still haven't found anybody. The current Philadelphia 76ers team is merely a shell of what it was during the 2011-12 NBA season, and it hasn't even been 18 months! The team has suddenly gone from thinking they were on the cusp of winning a championship to being one of the bottom feeder teams in the Eastern Conference. Upon retracing their steps from 18 months ago, it is truly unbelievable that they are in the position that they are now in.  To call it a shock is an understatement. The sky appeared to be the limit for this young team and now the limit seems to be 30 wins.

In terms of what the next step is for this team, I personally think it is to act as if they've been rebuilding for quite a while, rather than remembering where they just were. It's time for the entire Philadelphia 76ers front office to start bringing out the whisky in an attempt to binge-drink the Andrew Bynum trade out of their memory. A trade that they thought was going to bring the city their first NBA championship since the Michael Jackson Thriller album has instead sunk the team so low, that tanking for the heavily anticipated 2014 NBA Draft seems to actually be the best solution for the team at this point. The only thing that could make this all right in Philadelphia would be if they somehow won the 2014 NBA Draft lottery and selected Kansas freshman sensation Andrew Wiggins. That would truly cap off a crazy roller coaster ride for the franchise with a happy ending. But that is all just wild speculation at this point, and what is really important is for the Philadelphia 76ers organization to start looking towards building around young shooting guard Evan Turner and rookie power forward/center Nerlens Noel, who many thought was going to be the number one overall pick. Whether they like it or not, this team is going to be in the draft lottery next season, and unless the basketball gods smile on them and give them a top three pick in next year's draft, the process of re-booting this team into another exciting young team will be slow and painful. Bring out the fishing rods Philadelphia, your 76ers might be going fishing for quite a while.