Saturday Slam: The Washington Wizards are probably stuck with John Wall, at least for a while 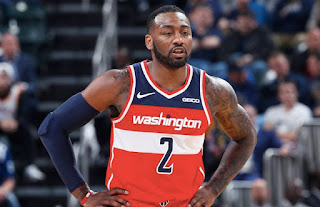 On Saturday, ESPN's Adrian Wojnarowski and Brian Windhorst both reported that Wizards point guard John Wall is set to undergo season-ending surgery on his left heel. Estimated recovery time is 6-8 months. At 14-23, the Wizards are already having a rough enough season as it is. With Wall now done for the season, their playoff hopes are dashed and their future suddenly becomes very murky.


Wizards star John Wall is planning to undergo season-ending surgery on his left heel, league sources tell @WindhorstESPN and me. Doctors have recommended that he undergo the surgery soon.
— Adrian Wojnarowski (@wojespn) December 29, 2018


What really adds to the complexity of all this is the fact that the Wizards inked Wall to a 4-year, $170M extension in the summer of 2017. Given that he played in just 41 games last season due to left knee troubles and is now set to play in only 32 games this year due to a left heel issue, it's fair to wonder whether or not the Wizards can count on Wall to be their franchise piece for the future.

The question that needs to be asked is where do the Wizards go from here? When healthy, Wall is one of the best point guards in the NBA, averaging 19.0 points, 9.2 assists, and 1.7 steals per game for his career. You definitely don't want to give up on a guy with that type of talent who is 28 years old. On the flip side, you don't want your future to be hampered by a guy who isn't playing up to the level expected of him.

Given his contract, the Wizards are going to have a hard time trading Wall anytime soon. No team is going to want to take that on with him being so injury prone. There's not much the Wizards could get back for him at this stage, which means that it's probably in their best interest to ride this out and see what type of production he gives them over the next couple of seasons. If some team is willing to sell the farm to get him, the Wizards should pounce all over it, but I'm highly skeptical of any team taking such a gamble.

The bottom line is that the Wizards are probably stuck with John Wall. At least for a while anyways. The best they can hope for is that he gets healthy after this season and lives up to his contract, helping them become a true contender in the Eastern Conference. In the meantime, the Wizards should secretly be hoping to tank the rest of the season and get has high of a draft pick as possible. If they could get a really talented rookie to come in next year, maybe things will start to trend upwards for them again.