Tomahawk Tuesday: Could the Los Angeles Clippers knock off the Golden State Warriors? 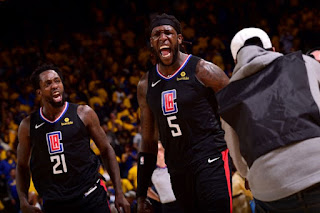 On Monday night, the Los Angeles Clippers pulled off the biggest comeback in NBA playoff history, defeating the Golden State Warriors 135-131 after trailing 94-63 with 7:30 to go in the 3rd quarter. While the Warriors didn't blow a 3-1 series lead like they did to the Cleveland Cavaliers, they did blow a 31 point lead, so the numbers 3 and 1 aren't exactly the most friendly to the Warriors. While a lot of people are going to make this about the Warriors and their second half collapse, I want to make this all about the Clippers and focus on their chances to actually win this series.

On the surface, the odds of the Clippers winning this series still seem low. We've seen teams get a shocking split on the road only to fail to deliver the goods at home. What makes upsets in the NBA playoffs so tough is you gotta beat the better team four out of seven times, which is no easy task. Especially when you're trying to knock off a team that is as talented as the Warriors. That all said, there are some reasons to think the Clippers might actually shock the basketball world and advance to the second round.

The first reason is the Warriors are going to have to soldier on without DeMarcus Cousins, who is out indefinitely with a torn left quadriceps. With Cousins out, the Warriors don't have much of a presence in the paint, giving Montrezl Harrell a golden opportunity to make his presence felt inside. Harrell finished with 25 points and 10 rebounds on Monday, showing why he's one of the best post players in the game. If the Warriors can't find a way to better protect the paint, Harrell could eat them for lunch all series long.

The second reason is the Clippers have Patrick Beverley. As Charles Barkley once said, in order to find success in the playoffs, you need to have a crazy guy and the Clippers have one in Beverley. He's a grade-A irritant and a fantastic defender cut out of the DeShawn Stevenson cloth. Beverley appears to be getting in the Warriors' head a bit and has a real opportunity to give Draymond Green a little taste of his own medicine.

The third reason is Lou Williams ain't scared. Williams scored 36 points and dished out 11 assists on Monday, doing a fantastic job of willing his team back to victory. He hit a lot of clutch shots down the stretch and played like a guy that lives for the big moments. When you got a guy like that on your squad, you always got a chance.

The fourth reason is the Clippers have Doc Rivers, who I feel is the most under-appreciated coach in the NBA. After his inability to win a ring with Chris Paul and Blake Griffin, many wrote off Rivers as one that could only win with the likes of Paul Pierce, Kevin Garnett, and Ray Allen. In truth, he's a fantastic coach and is doing his best work since his days in Boston. These Clippers are playing like a team and everyone is buying into Rivers' system. When you have a coach like Rivers, you got a shot to shock the world.

While the Warriors should be favored to win this series, they should not feel like they're guaranteed to win it. The Clippers are brimming with confidence after their historic comeback and now head to Los Angeles for two straight games. As crazy as this is to say, the Warriors are in real danger just two games into these playoffs.