Skyhook Sunday: Do the Toronto Raptors need to win Game 5? 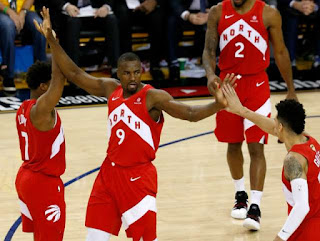 On Monday, the Toronto Raptors will get the chance to win their first NBA championship on their home floor. Even more impressive is the fact that this is Game 5. When I predicted the Golden State Warriors would win the series in six games, I thought I was showing the Raptors a fair amount of respect. I believed they were a dangerous, good team. My main reservation was the fact that this was their first time in the NBA Finals and they were going up against a team that has won two straight titles and three of the last four NBA Finals. The fact that the Raptors have owned the Warriors through the first four games of this series is incredible. It's just a matter of them finishing what they started and not letting the Warriors come back.

With that in mind, the question that I want to address tonight is do the Raptors need to win Game 5? Of course they want to finish this sucker ASAP, but what I'm asking is should they still feel confident in their chances to win this series even if they don't close it out on Monday night? Is having an insurance Game 7 at home enough to give them the peace of mind to not overly stress about Game 5?

My answer to this question is rather nuanced and I apologize in advance: The Raptors do not need to win Game 5, but it would be really nice if they did! I think the Raptors have played well enough that they deserve to be favorites for the rest of this series. My belief is you should always pick the home team to win a Game 7, which means if this series does come down to one final game in Toronto, the Raptors should be favored to win. Period. Kawhi Leonard has proven to be a terrific closer and if he's given a chance to close out a series twice on his home floor, you best believe he'll get it done one of those two times.

That all said, the longer this series goes on, the more life the Warriors will have. Especially since Kevin Durant could be back for a Game 7 or possibly sooner than that. The official status of KD is he practiced on Sunday and is a game-time decision for Monday, though it seems unlikely he'll play. If he is able to get back on the floor and give the Warriors any sort of boost, it could be lights out for the Raptors. The possible return of KD in a Game 6 or 7 should he not play in Game 5 should be enough to motivate the Raptors to win this series now. 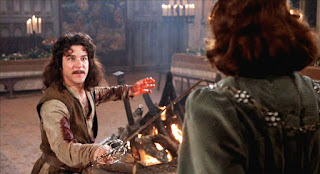 When the six-fingered man had Inigo Montoya on the ropes in The Princess Bride, he should have finished the job when he had Montoya severely wounded. Instead, he toyed with Montoya, allowing him to strike back and avenge the death of his father. The Raptors do not want to be like the six-fingered man. They want to end this while they have the Warriors on the ropes. So while they don't have to win Game 5 on Monday, this series will suddenly get really interesting if we are having a Game 6 in Oakland on Thursday night.

To connect with Ben Parker, click here.
Posted by Ben Parker at 11:10 PM