Saturday Slam: Now is the time for Adam Silver to push for his wacky tournament idea 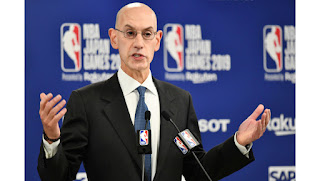 With the future of the 2019-20 NBA season up-in-the-air due to coronavirus/COVID-19, now is the time for NBA commissioner Adam Silver to push for his wacky tournament idea. Maybe not right now since player safety and all that jazz should be priority number one, but right after that, Silver has to be licking his chops to make his idea for an NBA tournament a reality.

The reason why now is the time is because the whole season is in peril and it's unclear how it can be saved without ending the season in say August or September. The NBA shouldn't want to get too out of synch with their yearly calendar, making a tournament an exciting and efficient way to expedite the season, save it, and get things back to normal as soon as possible.

As it stands, NBA teams have played around 65 games at this point of the year. E.g. Milwaukee Bucks (53-12). The NBA could still aim to finish the full 82 games, but instead of having a best of seven series for each round of the playoffs, they could do something crazy like invite all 30 teams to a round robin tournament that culminates in a knockout stage that is single elimination until the NBA Finals. It would be a fun substitute for March Madness in a year that has deprived us of the most exciting tournament in sports.

Like, really think about that for a second. A single elimination NBA tournament! Think of how intense each game would be! Especially if you opened the doors for say the Cleveland Cavaliers to get a shot at the title.

Such an idea seems crazy, but given the current climate we are in, now is the time to try something of this nature and see how things go. I'm not saying the NBA should permanently switch to a tournament model in future seasons. But, what I am saying is that if Adam Silver is serious about that kind of format becoming a reality, what better season to try such an experiment than this year? The fans would love it, the players would love it, and it would make the 2019-20 season fun and memorable in a good way. Even if it's just a one-time thing that gets scrapped and never used again.

To connect with Ben Parker, click here.
Posted by Ben Parker at 8:29 PM