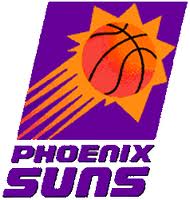 The Phoenix Suns have gone from being one of the up and coming teams in the NBA to a team that is on the verge of exploding. They are 12th in the Western Conference with a 12-21 record and are currently dealing with injury, coaching woes, and drama in the locker room. Any of those three things can hurt an NBA team's season, but when all three are happening to a team, it's a sign that things are going really bad.

On the injury front, the Suns have lost their star combo guard Eric Bledsoe for the season due to a torn meniscus in his left knee. Bledsoe was having his best season in the NBA, averaging 20.4 points per game, 6.1 assists, and 2.0 steals per game. With Bledsoe now done of the season, it'll be up to their other star guard Brandon Knight to keep the already sinking ship afloat.

But, remember what I said in the opening paragraph. The Suns have coaching and locker room issues in addition to Eric Bledsoe's season-ending injury. The coaching issues came to our knowledge when the team fired assistant coaches Mike Longabardi and Jerry Sichting earlier in the week. Earl Watson and Nate Bjorkgren were promoted to fill their roles, indicating that Jeff Hornacek's job as head coach is safe for the time being.

As for drama in the locker room, Markieff Morris was suspended two games for throwing a towel at head coach Jeff Hornacek after the team's loss to the Denver Nuggets. Morris' blowup on the bench indicates that things internally are not going well for the team, either. While it's possible that Morris' act was rogue, it certainly seems to indicate that inside the locker room, things aren't going well for the Suns in addition to their struggles on the court.

The only good news for the Phoenix Suns right now is that despite their struggles, they are still just 3 games back of the Utah Jazz for the 8th seed in the Western Conference playoffs. It's certainly possible that they right the ship and find a way to sneak into the playoffs. But even if they do, without Eric Bledsoe, there is little to no hope of them getting out of the first round of the playoffs. With him gone, they have virtually no chance at making noise in the playoffs.

This doesn't mean that they should pack it up and tank like the Philadelphia 76ers. They still have lots to play for in terms of building momentum for next season and ending their season on somewhat of a high note. If they were to make the playoffs, that would serve as such a high note and give them optimism that at full strength, they could be a team to make some noise in the 2016-17 season.

Still, even with all of that as something to shoot for, it's very alarming that they have fired a couple of assistants and had one of their players have a temper tantrum on the bench. These are usually the signs of a team that is going to get a lot worse before they get better.

What alarms me the most is that there were no signs of this kind of thing happening two months ago. I thought of the Suns as a well-managed team that was on the rise with a quality head coach. For Jeff Hornacek to suddenly be on the hot seat and for things to be on the verge of exploding just goes to show how fragile things can be in the NBA.
Posted by Ben Parker at 3:27 PM