Saturday Slam: Kevin Durant isn't the player we thought he was 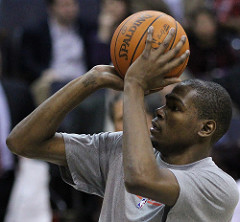 On a day when the United States of America celebrated its independence, Kevin Durant exercised his freedom as an unrestricted free agent, choosing to sign with the Golden State Warriors on a two-year, $54.3M deal. Most people who follow the NBA, fans and journalist alike, were expecting Kevin Durant to return to the Oklahoma City Thunder and build upon the success he had with Russell Westbrook last season.

I was one of those people who thought he would return to OKC because I didn’t see any good reason for him to leave. He had the Oklahoma City Thunder up 3-1 on the Golden State Warriors in the Western Conference Finals and appeared to have a team in Oklahoma City that was prime for a serious championship run in 2017. If Kevin Durant had decided to return to the Oklahoma City Thunder, they would have been favored by many to come out of the Western Conference in 2017.

However, it looks as though we were wrong to assume he could lead a team to a title. Instead, it appears as though Kevin Durant is rather a role player and a guy who can be used to round out a championship roster as opposed to being the centerpiece of one. If he were truly capable of being the centerpiece of a championship team, he would believe in his ability to be such a centerpiece. If he believed in his ability to be such a centerpiece, he wouldn’t have left Oklahoma City. It’s that simple.

During this past week, Kevin Durant has received a lot of criticism from fans and former NBA players alike, especially hall of fame players who never won a title like Reggie Miller and Charles Barkley. Reggie Miller stands on the firmest ground of all since he played for the Indiana Pacers his entire career and never tried to short cut his way to an NBA championship.

Reggie Miller said earlier this week that if there were any place he would want to win a championship in, it would be Indiana. He wouldn’t want it any other way. After the way they supported him through all of his ups and downs and all of his high moments, he wanted them to be right by his side if ever celebrated a championship.

In the case of Kevin Durant, he clearly doesn’t feel the same way about the fans in Oklahoma City as Reggie Miller does about the fans in Indiana. If he did, he wouldn’t have left them high and dry. Thunder fans have every right to feel upset and betrayed. Right as they appeared to be on the cusp of breaking through to win a championship, their knight in shining armor jumped off his horse to join forces with the enemy so that he could pillage and plunder for jewelry.

In case you haven’t caught on by now, I’m not a fan of Kevin Durant’s decision to leave the Oklahoma City Thunder to join the Golden State Warriors. It was a coward’s move and also disappointing. Kevin Durant had a golden opportunity to bring a championship to a city that he helped build and put on the map. Instead of being a man and doing his best to deliver them what he owed them, he took the easy way out and left right when the pressure started to build.

The best players in the history of basketball do one of two things: They either step up under pressure and win a title or they go down swinging until they have given everything that they got. In the case of Michael Jordan, Kobe Bryant, Magic Johnson, Larry Bird, Isiah Thomas, Dirk Nowitzki, Dwyane Wade, Tim Duncan, Stephen Curry, and LeBron James, they rose to the challenge and delivered their teams a championship.

As for guys like Karl Malone, John Stockton, Charles Barkley, Reggie Miller, Patrick Ewing, Steve Nash, and Gary Payton, they will be remembered as guys who in their primes did everything they could to lead their respective teams to a championship. While guys like Barkley, Malone, Nash, and Payton chased rings at the end of their careers, they didn’t do this until it was clear that they could no longer be the go-to option on a championship team.

Kevin Durant, sadly, is joining a separate and rather pathetic group of individuals who run away from greatness and instead try to ride other people’s coattails to success. Some of these people include… on second thought, I can’t think of anybody because they aren’t the ones who we remember in the history books. We remember the guys who either delivered or failed to deliver but at least tried to.

Let me give you an example from another league, the NFL. We all remember how John Elway led the Denver Broncos to three Super Bowls in the 1980s and got creamed in all of them. Even though those Denver Broncos teams never won a Super Bowl, we all remember how hard Elway tried and how he never gave up. Fast forward several years later to 1997 and 1998, John Elway finally won two Super Bowls with the Broncos. What made those Super Bowls all the more sweeter is the fact that we knew of his three Super Bowl losses in the 1980s. 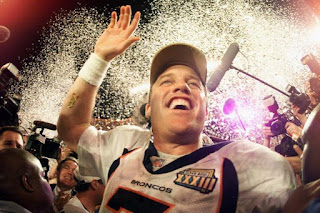 The same could have been for Kevin Durant in Oklahoma City. As soon as next season, or shortly after, Kevin Durant could have hoisted the Larry O’Brien Championship Trophy as a member of the Oklahoma City Thunder. However, it appears as though this will not be a sight that we will ever see. Unlike LeBron James’ relationship with Cleveland, Kevin Durant has no personal ties to the Oklahoma City area beyond his former relationship with the Thunder. He doesn’t have the same incentive to go back and bring them a title. Durant is instead from the Washington D.C. area, which he calls home, and not even they have a spot in Durant’s heart that is soft enough to make him want to go deliver them a title.

The fact of the matter is that when it comes to basketball, Kevin Durant is solely consumed with amassing as many championship rings as possible no matter the cost to his legacy, community, or reputation as a human being. This is his sole focus and he’ll probably get what he wants. He’ll probably win multiple rings in Golden State and become a part of a dynasty in the Bay Area.

But, when he looks back on those days of his career, will there be any part of him that wonders what would have happened had he stayed in Oklahoma City and not quit on the city? I sure hope not and at the end of the day, I do wish him good luck. I wouldn’t want his decision to haunt him forever.