Tomahawk Tuesday: What does Paul Millsap bring to the Denver Nuggets? 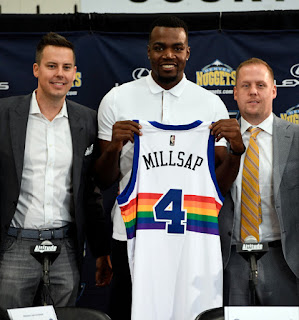 This summer, the Denver Nuggets made a splash of their own in signing Paul Millsap to a three-year, $90M deal. Millsap spent the past four seasons with the Atlanta Hawks after playing his first seven seasons with the Utah Jazz. Millsap was an All-Star in each of his four seasons with the Hawks, averaging 17.4 points, 8.3 rebounds, and 1.7 steals per game. Despite his success, the Hawks didn't feel they could contend with Millsap as a cornerstone of their franchise, ultimately deciding to let him walk in free agency.

The Hawks' decision shouldn't diminish what Millsap has accomplished during these past four years. He's established himself as one of the best players in the NBA, earning every bit of praise that he has received. They've been in need of a legitimate go-to option and Millsap certainly fits the bill.

The first thing that Millsap brings to this Nuggets team is toughness. Outside of Kenneth Faried, the Nuggets haven't had a lot of toughness on their team. Millsap is a guy who will battle for loose balls and never give up on a play. He plays with tremendous heart and gives it his all every time he steps on the floor.

Millsap also brings lots of experience. He's been an All-Star four straight seasons and has played in 87 playoff games, reaching the conference finals twice ('07 with Utah and '15 with Atlanta). The Nuggets haven't even sniffed a conference finals appearance since Carmelo Anthony left. To have a guy with that kind of experience and leadership will be huge.

In terms of his on the court abilities, Millsap brings versatility. At 6'8", 245 pounds, he can play both the small forward and power forward positions due to his combination of size, quickness, and all-around skill. He can shoot from the perimeter and take opponents off the dribble, creating a lot of mismatches on the floor. He'd be a really nice complimentary player for a guy like Kenneth Faried, who is more comfortable playing as a power forward.

The big question surrounding this Denver Nuggets team is whether or not they'll make the playoffs. Given the depth of the Western Conference, it's no guarantee that they do, but they definitely got a shot. While the Nuggets still need a lot more pieces to become a serious contender, adding Paul Millsap is a solid start. We've seen him anchor a very good Atlanta Hawks team and with the addition of a couple more pieces, there's no reason to doubt the Nuggets' ability to put a similar type of squad around him.