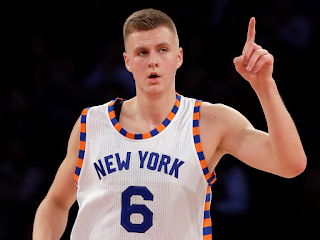 As NBA training camps are set to open in the coming days, the New York Knicks still have Carmelo Anthony and it's unclear whether or not he'll remain with the team though the season. So long as Anthony hangs around, he'll remain the face of the Knicks franchise and Kristaps Porzingis will continue to be viewed as part of the future as opposed to the present. That needs to change starting now.

With the 'Melo era not yielding the type of fruit that the Knicks were hoping, it's time for the franchise to turn over a new leaf and start afresh with Porzingis as their centerpiece. During his first two seasons in the league, "Godzingis" has proven his worth as a franchise player, averaging 16.1 points, 7.3 rebounds, and 1.9 blocks per game. Unlike Stephen A. Smith, I have been on the Porzingis hope train from day one. When I watched film of him in preparation for the 2015 NBA Draft, he reminded me of a 7'3", 240 pound Andrei Kirilenko capable of doing virtually everything on the floor.

With Porzingis solidifying himself as a legitimate star in the NBA, the Knicks need to start putting all of their resources into building a quality team around him. The first step towards doing this is to part ways with 'Melo and get back whatever you can for him. So long as 'Melo hangs around, the Knicks will continue to be in no mans land, looking ahead to a Porzingis era while not yet totally ridding themselves of an era that has been a failure.

The failure of this current era doesn't fall on 'Melo. From day one, he has done his part to help this team get back to relevance. The problem is that the Knicks never figured out a way to put the right pieces around him. Now that it's too late to put a contending squad around 'Melo, the least the Knicks can do is trade him to a team that has a shot at winning a championship.

When looking at the New York Knicks, it is clear that Kristaps Porzingis is their franchise player for the future and that they need to start building around him. The longer they hang on to 'Melo, the longer they put off the next chapter of their franchise. It's that simple.