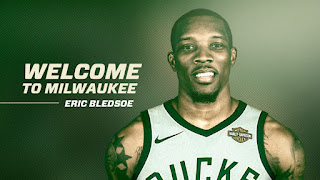 The big news of the week was the Phoenix Suns trading Eric Bledsoe to the Milwaukee Bucks for Greg Monroe, a protected 2018 1st round draft pick, and a 2018 protected 2nd round draft pick. Bledsoe made it clear on social media that he wanted out of Phoenix and the Suns granted his request.

Bledsoe is in his 8th season in the NBA and is now with his third team, spending his first three years with the Los Angeles Clippers and his next four years with the Phoenix Suns before being traded to the Bucks.

As the 18th overall pick in the 2010 NBA Draft, Bledsoe has blossomed into one of the better point guards in the NBA, having back-to-back 20+ points per game seasons in the 2015-16 and 2016-17 seasons. His biggest issue over the last couple of seasons has been staying healthy, suffering a torn meniscus in the 2015-16 season, allowing him to only play in 31 games. Last season, he was able to play in 66 games, but once again had his season shortened due to knee soreness.

Now that he is in Milwaukee, Bledsoe is hoping for a fresh start with a team that has a chance to do some damage in the playoffs. Bledsoe never made the playoffs with the Suns and with the current direction they are going in, it wasn't clear if he would be able to get back to the playoffs if he stayed in Phoenix for the long hall.

As far as whether or not Bledsoe will find new life in Milwaukee, he certainly has the chance to do so if he is able to stay healthy and if the Bucks in turn are able to get back to full strength with a healthy Jabari Parker. With Giannis Antetokounmpo at the helm, the Bucks have the pieces to do some serious damage in the Eastern Conference. It's just a matter of building on the foundation that they have and making sure no major injuries happen.