Over this past weekend was NBA All-Star Weekend in Los Angeles. It was an exciting weekend that brought the All-Star Game back to its roots, where defense was played for a least a good portion of the game. I will spare you of any commentary on Fergie's national anthem, though let me say that was the weirdest rendition of the anthem that I've ever heard. The rest of the weekend I thought was actually pretty good.

What made the skills challenge fun is it once again was a format of bigs versus guards. Bulls forward Lauri Markkanen was the top performer of the big men but was unable to outdo Dinwiddie, who was sort of a dark horse to win the whole thing. Clippers guard Lou Williams came in as the favorite given the home court advantage, but he wasn't able to deliver the goods. There was a little bit of controversy surrounding 76ers center Joel Embiid's performance since it looked like he may have cheated by skipping the part where you pass the ball through the hoop. However, what he did was perfectly legal.  If you miss both passes you have to continue on anyways, so after missing the first pass, Embiid just wanted to get the ball out as quickly as possible. I just wanted to set the record straight on that.

In the three-point shootout, Devin Booker was lights out, especially in the championship round, finishing with 28 points. Booker really heated up in his last couple of racks, making nine of his final 10 shots. His money ball rack was the last rack and he made four of those five shots, so he did a good job of placing his money ball rack in the right place. Booker defeated Rockets guard Eric Gordon, Clippers forward Tobias Harris, and Warriors guard Klay Thompson in the final round. Thompson finished with 25 points, but was mathematically eliminated when he got to the final rack, so it wasn't really as close as the final score indicates.

In the dunk contest, Jazz guard Donovan Mitchell and Cavaliers forward Larry Nance, Jr. were the top two performers, squaring off in the championship round. Mitchell stole the show with his tributes to Jazz legend Darrell Griffith and Raptors legend Vince Carter, though Nance had a really nice tribute dunk to his father and also a really impressive dunk in which he tapped the ball to himself twice off the glass. Mavericks guard Dennis Smith, Jr. also deserves some love for a through the legs dunk he did. The dunk contest wasn't as good as some contests in the past, but the guys who participated still did a nice job. 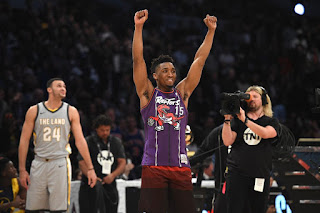 On Sunday, Team LeBron defeated Team Steph 148-145 in the All-Star Game. LeBron James led the way for his team with 29 points, 10 rebounds, and 8 assists, taking home the MVP honors. While every all-star game is an offensive clinic predicated on alley-oop dunks and highlight reel moves, what made this game fun was the defense that was actually played. Guys were blocking shots, guys were forcing steals, etc. This actually felt like a basketball game because of the defensive effort that was present. Fans want to see highlight dunks and incredible shots, but they want to see some effort on the defensive end as well. The effort on defense was really good for an all-star game and as a result, the fans got their money's worth in the end. I think the format where LeBron James and Stephen Curry drafted their own teams deserves some credit for making this happen. It made the guys feel a bit more invested in the event.

Overall, I was pleased with the NBA's All-Star Weekend. Everyone seemed to have a good time and did a good job putting on a show for the fans. It lived up to what it was supposed to be, which is fun entertainment that the whole family can enjoy. That is all that we can really ask for.