Tomahawk Tuesday: Can Carmelo Anthony help the Houston Rockets get over the hump? 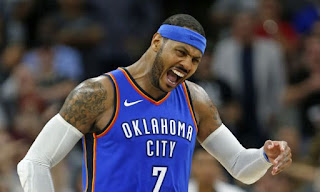 Earlier today, Shams Charania of Yahoo! Sports confirmed that Carmelo Anthony has officially agreed to sign with the Houston Rockets. ESPN's Adrian Wojnarowski added that Anthony's deal is expected to be a one-year, $2.4M deal.


Carmelo Anthony passes through waivers at 5 PM ET, clearing way for him to inform Houston that he will sign a one-year, $2.4M deal with Rockets.
— Adrian Wojnarowski (@wojespn) August 1, 2018


Anthony has had a bit of an up and down career. While being known as one of the league's best pure scorers, he has failed to live up to his own expectations of leading an NBA team to a championship. While he himself will never lead a team to a championship, he is presented with the next best thing, which is the chance to help a championship contender get over the hump.

Last season, the Rockets were one healthy Chris Paul hamstring away from winning an NBA championship and with Anthony now on board, the hope is that he'll give them just enough of a boost to get over the hump and supplant the Golden State Warriors as the best team in the league.

A lot of people are understandably skeptical of Anthony's ability to make a difference on this Rockets team. Since he has failed to win a championship everywhere he goes, it stands to reason that his time in Houston will likewise produce no championship jewelry.

What I want to do in this blog post is give you all a few reasons to believe that Anthony might just be the missing piece to a Houston Rockets championship recipe. You are certainly free to disagree with my reasons, but I still want to put this out there given all the negative posts about Anthony and his lack of championship success.

The first reason to think Anthony's addition to the Rockets could result in a championship is the simple fact that the Rockets were really close last year. The Rockets lost to the Warriors in Game 7 of the Western Conference Finals and as I said earlier, if it weren't for Chris Paul's hamstring injury, the Rockets probably would have won that series. Given how close the Rockets were last year, it's not like they need a whole lot more help to reach the promised land. If Melo can give them a little bit of help and take some of the scoring pressure off the backs of Paul and James Harden, that should be enough to make the difference.

Secondly, it isn't like Anthony sucked last year. With the Thunder, he averaged 16.2 points per game on 40.4% shooting from the field, 35.7% shooting from 3-point range, and 76.7% shooting from the foul line. He can still get buckets and in Houston, he won't need to be the volume shooter that he was asked to be in seasons past. He can come off the bench and provide sound spot minutes that make a real difference in terms of keeping the offense in a good rhythm.

Third, we've seen Anthony thrive in this type of role before. Anthony has played his best basketball in the Olympics, helping Team USA win multiple gold medals. As much as he likes to be a first option kind of guy, he's actually played his best basketball when he is more like the third or fourth option. If he can play like "Olympic Melo" as opposed to "New York Melo", the Rockets should really like their chances of giving the Warriors a serious run.

Given these reasons above, I actually think the Rockets should be excited about adding Carmelo Anthony. He comes in with plenty of experience, an ability to shoot the basketball, and a winning attitude. Unlike previous stops, Anthony is now in the twilight years of his career and more than anything he just wants to win a championship. While there are concerns about his willingness to play off the bench, I personally think Anthony is the type of player that will do whatever is asked of him in order to win a championship. If he wasn't, he wouldn't be coming to Houston in the first place.