Saturday Slam: People are overreacting to the Warriors' addition of DeMarcus Cousins 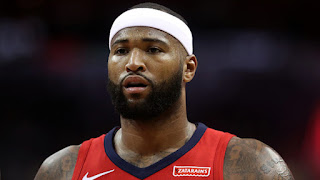 When the Golden State Warriors landed DeMarcus Cousins in free agency, it felt like the basketball world became unglued. Everyone from fans to players were upset that the Warriors landed another superstar. The Warriors already have the most stacked team in the NBA and for them to land perhaps the best big man in the league for just $5.3M felt like highway robbery.

If you follow NBALord.com on social media, you will know that I expressed frustration over the move. So, I don't want to come off as hypocritical when I say people are overreacting to Cousins going to the Warriors. I admit that I contributed to the hysteria and that I overreacted to the news like everybody else.

After thinking about the move for a little while, I've come to the conclusion that this move isn't something to get all up in arms about. What people are forgetting in all of this is the fact that Cousins is coming back from a torn Achilles, an injury that is as serious as they come. If Cousins hadn't suffered a torn Achilles to end his season in New Orleans, the Warriors wouldn't have landed him in the first place. What made him available for just $5.3M is the fact that it is far from certain that he'll ever get back to his regular self again. He might still be able to play at an NBA level, but will he once again put up 25.2 points and 12.9 rebounds per game? That remains to be seen.

I totally understand why everyone reacted the way they did. The Warriors are stacking up on talent and adding Cousins for so little money felt like they were rubbing it in everybody's faces. There's a certain arrogance that this Warriors team possesses that rubs people the wrong way. As one who lives in the Bay Area, I get it. I'm around "Dub Nation" 24/7.

Still, we shouldn't let an overall frustration with the Warriors cloud our judgment over this particular move. The reality is that we are yet to see how strong Cousins bounces back from this injury and until we do, we should reserve judgment about him giving the Warriors a dominant big man. As for the other 29 teams in the NBA that are upset about this move, if they are really so upset, why did none of them offer Cousins a decent contract? The fact that the Warriors are the only team that offered Cousins a deal just shows how uncertain his future really is. If there was good reason to believe he could do some serious damage, another team would have offered him a contract in the neighborhood of $20M or more.

My prediction is DeMarcus Cousins will have a nice year for the Warriors and give them just what they need, which is a sound presence in the paint that can score, rebound, and protect the rim a little bit. However, I do not expect Cousins to produce like he did prior to his injury. A torn Achilles is the most serious injury an athlete can get and for a lot of guys, it might as well be a death wish. With that in mind, I think we should all just step back and wait to see what happens before declaring this move the crime of the century.