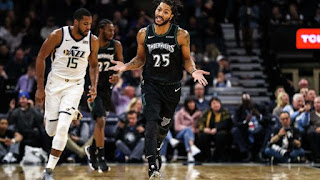 After looking like his career was probably over due to serious knee problems, Derrick Rose is having a renaissance in Minnesota, averaging 19.3 points and 4.8 assists per game on 48.3% shooting from the field, 43.1% shooting from 3-point range, and 85.4% shooting from the foul line. He's playing like he has a new lease on life, enjoying every moment he's on an NBA floor.

Back in his 2011 MVP season, Rose was one of the most exciting players in league history. He attacked the rim with reckless abandon and was incredibly fearless, always putting his body on the line. Unfortunately, that style of play caught up with him, resulting in an ACL tear, a torn meniscus, and other issues that would derail his career.

While it's easy to root for any player to make a comeback, it's been especially fun to watch Rose hit game winners and energize NBA fans once more. Even though we'll never know how good he would have become had the injuries not happened, there's something even more satisfying about watching him have this type of season knowing what he's been through. He could have hung up his sneakers and given up on his dream of playing high level basketball again. Instead, he kept honing his craft and developed a jump shot, something he would need after losing so much of his explosion.

Given all that he's been through and how well he's playing, Rose absolutely deserves to be an All-Star this year. He's playing like one and I think the fans would get a real kick out of watching him play. For all the years that Kobe Bryant and other legends have played in All-Star games past their prime, it would only be fair if Rose got that same type of treatment. The only difference is he's legitimately playing like an All-Star!

Once again, it's been an absolute blast to watch Derrick Rose have the type of season he's been having. He's always struck me as a really humble, down to earth person. It's great to see guys like him find success.