Tomahawk Tuesday: Are the Golden State Warriors better with Stephen Curry as their featured player? 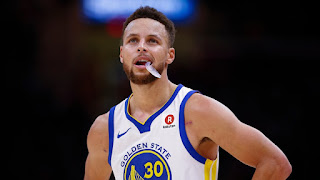 The Warriors' sweep of the Trail Blazers was actually their easiest series of the playoffs. What makes that funny is they did so without their best player Kevin Durant, who remains out indefinitely with a calf injury. The Warriors' dominance without Durant has created a debate among fans and analysts regarding which team is better: the Dubs with Kevin Durant as the featured player or the Dubs with Stephen Curry as the featured player. On the surface it seems like a silly question, but when you learn that the Warriors have won 31 of their last 32 games in which Stephen Curry plays and Kevin Durant does not, you have to take the question a lot more seriously.

Personally, I think it's pretty clear that when Durant is not on the floor, the Warriors play better team basketball. The ball moves much better, everyone gets more touches, and the flow is better. Stephen Curry feeds off of this flow and gets energized by getting everyone involved in the offense. The better the ball movement, the more dangerous Curry is. While Kevin Durant needs to dominate the ball and grind things to a halt, taking guys one-on-one, Curry is the exact opposite, which benefits the rest of the team.

Don't get me wrong, with Kevin Durant, the Warriors are really really scary. They've won two straight titles with him and have an overload of talent that no team in the NBA can handle. But that overload of talent changes the dynamic of the team in a way that appears to make everyone play more stagnant. There tends to be more room for error when Durant is on the court because everyone knows he'll bail them out. When he's off the court, everyone is forced to play sharper and more on point.

Klay Thompson and Draymond Green take on bigger roles with Durant out. Roles that they're eager to have. Thompson gets more touches and more opportunities to heat up from beyond the arc while Green is able to do more of what he does best which is rebound, defend, and find open shooters.

It's not just Thompson and Green that take on bigger roles. Alfonzo McKinnie, Kevon Looney, and Shaun Livingston have also stepped up, doing whatever Steve Kerr asks of them. While some teams would wither without their star player, the way this Warriors team is composed, everyone embraces the challenge and actually elevates their level of play.

I know a lot of analysts are too afraid to say it because of how good Kevin Durant is, but the harsh truth is this Warriors team is actually better with Stephen Curry as their featured player. It's not just that Curry plays better, it's that everyone plays better, which in turn makes Curry play better. If I'm the Warriors, I really wouldn't worry too much about Durant returning for the rest of the season. If anything, I might secretly be hoping he doesn't come back at all and signs with the New York Knicks in the offseason.