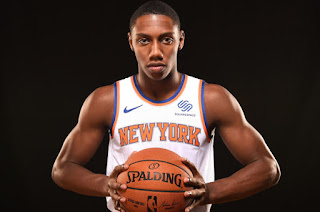 The New York Knicks have not been to the playoffs since the 2012-13 season in which they finished second in the Eastern Conference with a 54-28 record. Since that season, the Knicks have gone downhill rather quickly, finishing with six consecutive losing seasons. The 2014-15 and 2018-19 seasons were tied for the worst seasons in franchise history as the Knicks went 17-65 both years.

During this tumultuous stretch, the Knicks have really struggled to find a franchise centerpiece. Carmelo Anthony did a decent job at filling the role, but he didn't have enough help thanks to Phil Jackson's inability to run a front office. Kristaps Porzingis could have been the answer, but his torn ACL cast a lot of doubt over his abilities to be the man going forward.

Then comes R.J. Barrett, the #3 overall pick in the 2019 NBA Draft out of Duke. During his one year at Duke, Barrett was in the shadows of nationwide phenom Zion Williamson, playing second fiddle to his highlight dunks. Being second fiddle didn't mean he didn't produce. Barrett averaged 22.6 points and 7.6 rebounds per game, showing that if Williamson wasn't around, the Blue Devils would have still been a force to be reckoned with.

With Williamson now in New Orleans trying to turn the Pelicans around, Barrett has the Big Apple all to himself, fulfilling a boyhood dream to play for the Knicks. Excited for what lies ahead, Barrett hopes to turn the Knicks' fortunes around and bring them back to glory. They've been looking for a savior for quite some time and perhaps they have found their man in Barrett.

When forecasting the future of the Knicks, it's clear that R.J. Barrett is at the center of it. He's their new franchise piece and finally is out of Zion Williamson's shadow. This is his time to shine. If he's able to deliver and become a legit franchise player, odds are good the Knicks will bounce back and become a contender in the Eastern Conference. If he's not, the Knicks will continue to flounder like they have for the past few years until someone else comes along to deliver them from bondage.