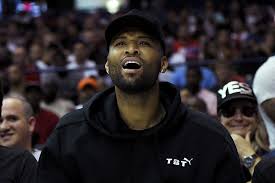 At the end of the 2016-17 season, DeMarcus Cousins concluded a season in which he averaged 27.0 points and 11.0 rebounds per game in 72 total games played. He spent the bulk of that season with the Sacramento Kings but was traded to the New Orleans Pelicans to conclude the season. Since that year, everything has gone downhill for him in a rather shocking manner.

First, in the middle of the 2017-18 season, Cousins suffered a torn Achilles which limited his season to just 48 games. Prior to the injury, he was playing really good basketball, averaging 25.2 points and 12.9 rebounds per game. A torn Achilles is no joke, but an injury that one can come back from with the proper rehab. Still, no team wanted to take a chance on him until the Golden State Warriors scooped him up for close to nothing. He spent most of the 2018-19 season in street clothes, but was able to produce a little bit during the 30 games he played, averaging 16.3 points and 8.2 rebounds per game before going down once again with a torn left quadriceps.

Already looking like he might be damaged goods, the Los Angeles Lakers threw their caution to the wind and decided to sign him this past July, hoping that he could get back to full strength. Instead, he tore his ACL in a preseason workout a little over a month later in mid-August, ruling him out for the entire 2019-20 season.

In the midst of all this injury misfortune, Cousins got married and even that didn't go as planned thanks to a leaked audio tape of him threatening to kill his ex-girlfriend over the phone for not allowing their son to come to his wedding. As a result, an arrest warrant was issued and now he's in the middle of an ugly legal dispute.

At just 29 years of age, Cousins' career seems to be over and what's crazy is that it wasn't that long ago that he was an NBA All-Star. We've seen guys drop off quickly, but rarely do we see guys drop off like this. It's like one day he's the best big man in the NBA and the next day he's having a hard time convincing teams to take a chance on him. Hopefully for him, he is able to find his second wind. If not, he better get ready for life after basketball.