Saturday Slam: Will it work out for Carmelo Anthony in Portland? 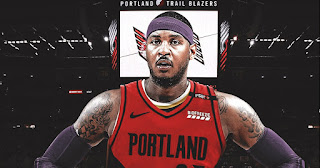 The big news of the week is Carmelo Anthony signing a non-guaranteed contract with the Portland Trail Blazers. After looking like he may never get another shot in the NBA, Anthony is getting at least one more shot. The last full season Anthony played was the 2017-18 season in which he averaged 16.2 points per game with the Oklahoma City Thunder. In 10 games with the Houston Rockets last year, he averaged 13.4 points per game, showing that he can still get buckets.

I think this is a mutually beneficial move for both Anthony and the Trail Blazers. Anthony gets another shot at redemption and a chance to finish his career on a high note while the Trail Blazers add a guy who might give them 10+ points per game. The Trail Blazers need to make some sort of move to give themselves an edge in the Western Conference and maybe this move will do the trick.

For Anthony, if this doesn't work out, he's probably done for good, so he really needs to hope this goes well. He needs to be willing to play within Portland's system and do whatever is asked of him. If he goes out there and chucks up a bunch of shots that are low percentage, he'll get waived really quick.

Personally, I've always liked Carmelo Anthony. He's come across as a class act and has always gone out there and played hard. Unfortunately, his lack of defense and need to take a lot of shots has rendered him somewhat obsolete as the NBA has shifted towards a more positionless league. Specialists like Anthony can't thrive like they once did. Hopefully, this ends on a positive note for Anthony. He's done a lot for the game of basketball and deserves to go out the right way.