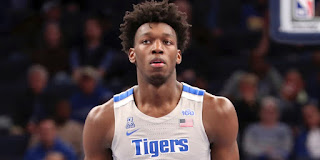 
Due to receiving funds from Memphis head coach Penny Hardaway to help him move to Memphis, the nation's top player James Wiseman has been suspended 12 games and fined $11,500 by the NCAA. He has to give the money to a charity of his choice. It should also be noted that Hardaway gave Wiseman the money when he was a booster and not a head coach, so that makes things not quite as shady.

What I'm sure some people are wondering is whether or not this suspension will hurt Wiseman's draft stock. While I can't predict the future and confirm what will be the end outcome of all this, I personally don't see this having any effect on his draft stock. For the simple reason that (A) this issue has nothing to do with his on-court performance and (B) this kind of stuff (players receiving benefits) happens all the freaking time in college basketball.

If you thought college hoops was this clean sport where everyone plays fair and only a handful of guys get benefits, you live in a fantasy land. That's not to say there aren't clean programs out there. There are. But, what is an unfortunate fact is there are a lot of programs that are not clean and even more that toe the line.

What Wiseman and Memphis are really being penalized for is getting caught and also being high profile. If Wiseman was the 13th scholarship player on Memphis and not the top player in the country, nobody would have given a crap about him receiving funds from Hardaway. On the flip side, you could also argue if he was the 13th scholarship player on Memphis, Hardaway wouldn't have bothered to give him the funds in the first place. But that circular argument or whatever you want to call it misses the point.

The point is this happens all the time and the NCAA just randomly lays down rulings without any rhyme or reason. I mean, the fact that Sean Miller is still coaching at Arizona in and of itself is pretty mind boggling. If he's allowed to continue to coach after all that he's been accused of doing, it's pretty absurd that Wiseman is not allowed to play. Especially since he will be able to play come January. I'm ok with the fine and him having to give the money back. That's cool. But for crying out loud, let him play!

Going back to the title of this post, this suspension should have no impact on Wiseman's draft stock. If anything it could help it. That's 12 less games when he could get hurt! Plus, NBA teams draft largely on potential and what you could be in five years. They're not overly worried about what you look like at the moment. Especially if you are a freshman.

The bottom line is regardless of the NCAA's ruling, Wiseman will in all likelihood be the top pick in the 2020 NBA Draft. Athletic 7-footers like him don't grow on trees. Him taking money from Hardaway or anyone else doesn't change that fact.

To connect with Ben Parker, click here.
Posted by Ben Parker at 11:34 PM