Saturday Slam: The Cleveland Cavaliers are a mess after letting John Beilein go 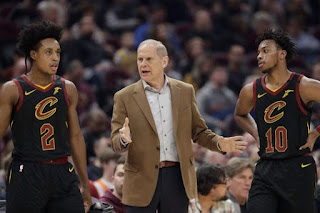 The big news story of the week in the NBA is the Cleveland Cavaliers parting ways with their head coach John Beilein, who didn't even get a chance to finish year one of his contract. The official report is that Beilein resigned and is being given a new role in the organization. J.B. Bickerstaff has been promoted from assistant coach to head coach. Just so we're clear on that.

The Beilein era didn't go as the Cavaliers hoped. They went an abysmal 14-40 during his brief stint as head coach and all along the way there were reports of tension and frustration from both the players and Beilein. The nut of it is Beilein took an old-school college approach to the NBA and it backfired in his face. A lot of what players were complaining about is what you would expect a good basketball coach to do: Practice hard, watch a lot of film, etc.

Unfortunately, that old-school approach works better in college where players aren't getting paid and are not yet in the NBA. Sadly, in the NBA you have a lot of players who act entitled and think they're better than they actually are. Charles Barkley sounded off on this below.

Now don't get me wrong, NBA players are incredibly gifted athletes and basketball players. That's why they're there. However, that doesn't mean they don't still have to work hard and perfect their craft. It would be one thing if the Cavaliers had a bona fide superstar on their team. Someone who could mentor the younger players like Collin Sexton to make it clear that being in the NBA doesn't mean you stop watching film and practicing hard.

The players that have been complaining about Beilein (e.g. Andre Drummond who just got to Cleveland) haven't accomplished much in their careers in terms of team success. They're great individual talents, but they haven't figured out how to play as a team. That's where a good coach like Beilein is supposed to help.

Ultimately, what's happened in Cleveland rests on the shoulders of their front office. Namely general manager Koby Altman. You can't hire a coach and then not even have him complete his first year. That's embarrassing. You need to send a message to your players that they can't just blame their coach for all their problems. Their job is to play basketball and they need to treat it as such.

In the event that Beilein truly wasn't a good fit and not cut out for the NBA, that also is a bad look for management. If he was as much of a disaster as the players want us to think he was, then that means he was a bad hire and shouldn't have been offered a job in the first place. Given his track record at Michigan, I have a hard time believing he's as bad as they say he is. Even though the NBA game is different, it's still the same sport.

Going forward, the Cavaliers need to do some soul searching as an organization after the way this all went down. Their front office needs to seriously evaluate if they have the right players to right the ship and whether or not Bickerstaff is the man for the job. There are lots of questions that need to be asked by the Cavaliers and they're not easy questions to have to ask yourself. The Cavaliers are a mess right now and it's unclear how they'll get themselves out of it.