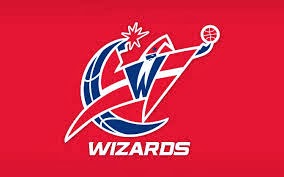 Yes, I know the title of this article sounds crazy, but it’s actually true. The Washington Wizards could make a very deep run in the NBA Playoffs this year! How deep? Well, how does Eastern Conference Finals sound? That’s right, with the Indiana Pacers on the brink of complete self-destruction, the main benefactor of all this could be the Washington Wizards who are presently awaiting the winner of the Pacers/Hawks series after dispatching of the Chicago Bulls in 5 games.
The Wizards already are a dangerous team as it is with John Wall, Bradley Beal, Marcin Gortat, and Nene. With they way those guys are playing and the way the Pacers are playing, there’s no reason to not think the Wizards could get to the Eastern Conference Finals and take out the Pacers IF the Pacers get past the Hawks. If the Pacers lose Game 7 against the Hawks and it’s the Wizards vs. the Hawks, then I think with home court advantage and a more healthy line up, the Wizards should be clear favorites to win that series and get to the Eastern Conference Finals where they would presumably face the Miami Heat.
There is still plenty of playoff basketball left, and the odds are still good that we see a Heat-Pacers series to decide the East. But I really am a fan of these Wizards and they exceeded my expectations since I had them taking out the Bulls in 6 games.  If they do somehow get to the Eastern Conference Finals, they will be one series away from the NBA Finals and while I assume they’ll see the Heat, there is a chance that the Nets take out the Heat, which would set up a Wizards/Nets Eastern Conference Finals with the Wizards getting home court. If they just hold serve, they could find themselves in the NBA Finals!!
Like I said, there is tons of basketball left, and I’m getting way ahead of myself, but if I was a fan of the Washington Wizards, I would be beyond excited about the draw that my team has gotten in the playoffs. With good odds at getting past whoever wins the Pacers/Hawks series, the Wizards definitely could be on the verge of pulling off one of the more surprising playoff runs in recent memory.