Where Do The Thunder Go From Here? 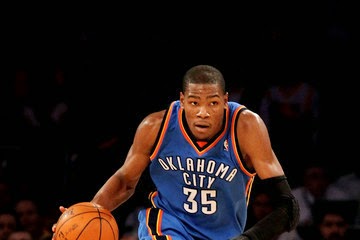 The Oklahoma City Thunder once again were knocking on the door of an NBA championship only to fall short of their goal. Kevin Durant deservedly won MVP, but he clearly was unable to will his team to victory against the more balanced San Antonio Spurs, who will face the Miami Heat in the NBA Finals starting Thursday. Durant's inability to will his team to victory has much more to do with the supporting cast around him than it does with him not stepping up in the series. Outside of Russell Westbrook, Durant has nobody else on his team who he can rely on to score. Serge Ibaka and Reggie Jackson do average in double figures, but neither of them make up for the absence of James Harden.

The harsh reality for the Thunder is that even with the league's best player in Kevin Durant and a top-ten player in Russell Westbrook, they do not have enough to win a championship. The bench is too thin and inconsistent and the interior is solid but not dominant. The difficult question that the Thunder have to ask themselves as well as answer is "Where do we go from here?" The answer to that question is far from obvious, but I will try to throw out a few ideas.

The first answer to this question that is most straight forward is to fire Scott Brooks, their head coach. There are a lot of quality coaches looking for work (E.g. Lionel Hollins, Alvin Gentry, and Mark Jackson). If the Thunder feel like what they have on their roster is enough to win a title, then firing Brooks makes sense. I personally don't think the have enough on their roster to win a title, but the Thunder could easily argue that a team that has Kevin Durant, Russell Westbrook, and Serge Ibaka by default should be a contending team. I certainly wouldn't be shocked if they held this position, and if they do, then Brooks likely gets the axe.

The second possible option is to trade Russell Westbrook. This move is risky, but the rewards could be high depending on what they get back. Westbrook at times takes the ball out of Durant's hands and tries to take over when it really needs to be Kevin Durant. Kevin Durant and Russell Westbrook have shown to be able to co-exist on the floor, but that doesn't mean that they can win a title together. Durant might benefit from having a better supporting cast around him that can help him out in more areas but also let him be the alpha dog. Westbrook is clearly a double-edged sword for Durant and the Thunder. He scores really well and can take pressure off by taking over games, but he also takes a lot of ill-advised shots and doesn't always let Durant take over the game when he needs to. For the right price (and it has to really be the right price), letting Westbrook go is the smart move.

The third option is pretty radical and highly unlikely, but still possible. That option is to keep Kevin Durant but view everybody else as expendable and open to being traded. This means Russell Westbrook, Reggie Jackson, Serge Ibaka, Kendrick Perkins, Steven Adams, and everybody else on the team not named Kevin Durant can be traded. This sounds insane, but it is an option. If the Thunder want to keep Kevin Durant happy, they may want to see what they can get back for a few different players. Could they get Kevin Love? Could they get Klay Thompson or Harrison Barnes? There are some good players out there that don't play for them who would be great alongside Kevin Durant. Blowing up the team through trading for other quality players is an option that the Thunder should consider, though I doubt they'll do it.

The fourth option is to stand pat and gun for the #1 seed. Maybe if they have another year of experience and growth under their belts, this same core group of guys can win it all if they get the #1 seed in the Western Conference and have home court advantage. The problem with this decision is that this decision says that nothing is wrong with the team and nothing needs to be fixed. That's a hard sell when your team hasn't been to the NBA Finals in 2 years and teams around you like the Warriors, Trail Blazers, Rockets, and Clippers are getting better.

I personally think the Thunder have to do something. What exactly, I don't know, but if I had to make a move I would strongly consider firing Scott Brooks and trading Russell Westbrook. Those two moves are the simplest moves to make and moves that can yield the highest rewards. If Kevin Durant doesn't have enough around him, then the Thunder need to think about dealing their best asset, which is Russell Westbrook. They might get themselves an overall better package of players to help him win if they trade Westbrook for the right price. Also, firing Brooks almost seems too obvious of a move to make. He has made some shaky coaching moves related to his rotation like playing guys too long, and he doesn't exactly seem to be the kind of guy who makes great tactical decisions in games. Combine that with the fact that there are quality coaches looking for work and all of a sudden Scott Brooks becomes really expendable.