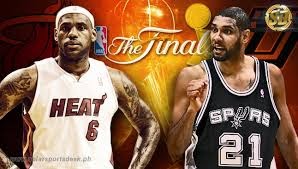 Probably the most unique part about this series is that it is an NBA Finals rematch from last year. The last time the same two teams faced off in the NBA Finals for the second year in a row was 1998 when the Utah Jazz and Chicago Bulls squared off for the second straight time. Like the 1998 NBA Finals, the Eastern Conference champs won the previous NBA Finals matchup. Also like the 1998 NBA Finals, the Western Conference team is billed as the better overall team but the Eastern Conference team is billed as having the game's best player. I'm not saying LeBron James is in the same league as Michael Jordan, but I am saying that like Jordan in 1998, LeBron James is the league's best player. What this NBA Finals is really about is whether or not a better overall team can take out a team that has the best player in the world. The Jazz couldn't overcome the Bulls, and now we will see if the Spurs can overcome the Heat.

One important difference between the 1998 NBA Finals and the 2014 NBA Finals is that the Spurs have won 4 NBA titles going into this series and the Jazz had won zero, so I do like the Spurs' odds better than I would have liked the odds of the Jazz. Still, it is really hard to pick against a team that has the league's best player. The NBA is a league that ultimately is dominated by superstars at an almost disproportionate rate. But with that being said, to say that the Heat win this series is to say that even though the Spurs have home court advantage, a deeper team, a better coach, and have beaten better teams to get to the NBA Finals, the Heat will still find a way to win the series because LeBron James is a force of nature like unto Michael Jordan. I do not think he is a force of nature like Michael Jordan, which is a big reason why I think that the Heat will fall short of their goal of a three-peat.

But with that being said, I don't mean to "slight" the Miami Heat in the way that LeBron James feels like they have. The Heat are the two-time defending champions who have been to three straight NBA Finals. That means that they have to be doing something right. What makes the Heat so dangerous is that when healthy (and they are healthy right now), the Heat have the NBA's best starting lineup. LeBron James is the best player in the NBA and easily one of the top 10 greatest players of all time (probably top 5), and Dwyane Wade is one of the top 5 shooting guards of all-time. When you have two hall of fame players who are among the very best to do what they do on the same team, you have yourself a team that is very difficult to stop. In addition, the Heat have a very underrated power forward in Chris Bosh who has evolved into a lethal threat on the perimeter and they also have a couple of guys who make great role players in Ray Allen and Shane Battier. Both guys are good to hit clutch shots and both play very unselfishly. To say the least, the Heat have a team that is a quasi all-star team, and that makes them very tough to beat.

But while we talk about how star-laden the Heat are, it isn't like the Spurs are a team that doesn't have stars and hall of famers of their own. On their team they have Tim Duncan, who is indisputably the greatest power forward of all-time, Tony Parker, who is arguably the best point guard in the NBA and one of the greatest point guards ever, and a wily old Manu Ginobili who still has tricks up his sleeves and still likes to remind us why he is a hall of fame player. Point guard play and play in the paint is where the Heat are most vulnerable and that's a problem for them because that is where the Spurs excel the most. Tim Duncan still gets it done inside and Tony Parker carves up defenses like he is carving a Thanksgiving turkey. In addition, the Spurs have fantastic wing players to prevent defenses from collapsing on Tony Parker with Danny Green, Manu Ginobili, Marco Belinelli, and Kawhi Leonard all capable of knocking down threes with relative ease. What makes the Spurs so tough is that not only do they have hall of fame players to come through in crunch time, but they also have fantastic role players who at times can be equally dangerous. In this discussion, we haven't even brought up Tiago Splitter, Boris Diaw, Patty Mills, Matt Bonner, or Corey Joseph who are additional guys that the Heat have to worry about. When you look at the Spurs as a collective whole, they can beat you in multiple ways, with 11 guys who are all capable of doing serious damage when called upon.

The Heat have nothing close to that kind of depth, and they ultimately need LeBron James and Dwyane Wade to play well in order for them to win this series. The Spurs on the other hand do not need one or two particular players to play well. They run a very well-oiled system that allows different players to step up and cover for guys who are having a rough night. Even if Tony Parker is having a bad night or is injured, the Spurs can still find ways to win because what they rely on more than anything is their system and not one or two particular players. The Heat don't have this luxury. They must have LeBron James play well in this series or they are doomed. If he has a bad night, they are done. It is that simple.

Ultimately, the fact that the margin for error is smaller for the Heat than it is for the Spurs is why I am picking the Spurs to win this series in 7 games. They have more weapons, more options, and a coach in Gregg Popovich who knows how to put those weapons to use. The Heat's head coach Erik Spoelstra has less options and he must rely on LeBron James to will the Heat to victory in order for the Heat to win this series. There are adjustments he can do like putting Chris Andersen with Chris Bosh, or moving LeBron James to the power forward position in certain situations, but ultimately there is less within his control. Spoelstra's role as head coach is much more like the boss of a company who makes sure everybody is doing their job, whereas Popovich's job is much more like a musical composer asked to compose a symphony using a variety of instruments. Spoelstra just needs to make sure everybody does their job and Popovich on the other hand tries to find creative ways to bring out the french horn and have it carry the melody (Yes, Boris Diaw is the French Horn of the Spurs).

The point is, the philosophies of both coaches is very different because of the tools they've been given to work with. Spoelstra has the best two tools to work with in LeBron James and Dwyane Wade, but Gregg Popovich has more tools to work with who collectively are better than the sum of all the tools that Erik Spoelstra has. Typically teams with the best player win a 7 game series in the NBA, but they can be beaten by teams that are way better than them collectively and are better overall teams. I think the Spurs as an overall team are much better than the Heat, which is why I have them winning this series in 7 games.