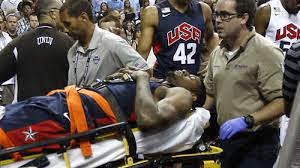 The news of Paul George breaking his leg in a USA Basketball scrimmage in Las Vegas rocked the basketball world earlier this month. Whether you are a fan, a writer, a player, a coach, or somebody in management, this news was tough to stomach. Part of it has to do with the setting and part of it has to do with the sheer nauseating nature of the injury itself. You don't want to see any athlete break their leg, but when it happens in a setting in which the athlete is representing their country, the word "tragic" comes to mind as the best way to articulate and describe what has happened.

In a larger context, questions arise about what this kind of injury does to the future of USA Basketball when the participants are being paid millions of dollars by their respective NBA teams while not being paid even a fraction of that to play for Team USA. Will it make more superstars pull out like Kevin Durant did this week or will most players hold the position that what happened to Paul George was an unfortunate freak accident that could have happened in any NBA game? I will argue that while most players will hold the position that this was just a freak accident, this will also greatly affect USA Basketball when it comes to getting players for non-Olympic competitions. 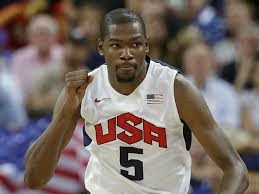 People are wondering about whether or not Kevin Durant's decision to pull out of USA Basketball for the upcoming FIBA World Cup has anything to do with Paul George's injury. The answer is yes it does and so does the fact that nobody cares about the FIBA World Cup outside of basketball junkies like me.

Had this injury happened right before the 2016 Olympics, I don't think Kevin Durant would be pulling out due to the fact that in basketball, the Olympics carries a lot more weight than does the FIBA World Cup or any other international competition. The success of the 1992 Dream Team in Barcelona, Spain has made a lasting imprint on the history of basketball to the point that I think every NBA player who is an American citizen wants to play on the USA Olympic basketball team at least once in his career.

The United States has a rich tradition of dominating that event every four years and taking home the gold medal, making it one of the highest honors in all of basketball second only to winning an NBA championship. To many great players who failed to win an NBA championship like John Stockton, Karl Malone, Patrick Ewing, and Charles Barkley, winning an Olympic gold medal is the greatest achievement of their careers due to the sheer prestige of being able to play on Team USA.

However, that honor and distinction doesn't accompany the FIBA World Cup or any other international competition because the best players in the United States don't play. LeBron James, Chris Paul, and Carmelo Anthony are all sitting out of the FIBA World Cup, so should it really come as a surprise that Kevin Durant is doing the same thing especially after the Paul George injury?

However, this doesn't mean that the United States won't be able to compete and win other international competitions outside of the Olympics. USA Basketball can go 25-35 guys deep and still have the best team on the floor. But USA Basketball isn't just about winning trophies. It's about featuring the very best players in the world and the opportunities for USA Basketball to do that are going to shrink to being once every four years at the Olympics.

In terms of its impact on world-wide basketball events, this is obviously huge since USA Basketball is always the biggest draw and the team that everybody wants to see. FIBA wants to eventually rival FIFA in popularity, but it's always going to seem like a little brother standing next to FIFA so long as USA Basketball is only able to get its best players on the floor for the Olympics.

The Paul George injury has a larger impact on FIBA than on USA Basketball because USA Basketball is all about the Olympics and FIBA is all about the other events that go on besides the Olympics. If FIBA wants its World Cup to become a major event, it will have to find ways to get guys like LeBron James and Kevin Durant to participate which at this point seems like a tall order. USA Basketball will continue to march on as a gold medal winning machine at the Olympics with its brightest stars showing up, but as for FIBA and its efforts to build up events like the FIBA World Cup, this injury could be a devastating blow.