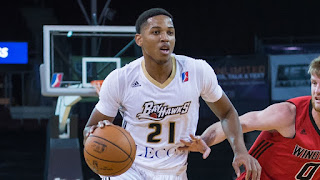 The #1 overall pick in the 2016-17 NBA Development League draft was Anthony Brown, the former Stanford standout that was drafted by the Los Angeles Lakers in the early 2nd round of the 2015 NBA Draft. During the 2015-16 NBA season with the Lakers, Brown averaged 4.0 points per game on 28.6% shooting from 3-point range in 29 total games played (20.7 minutes per game). Brown didn't have the rookie season he was looking for, but he should prove himself in the D-League this season as a player worthy of another shot in the NBA.

I watched Anthony Brown play during his senior year at Stanford and I was very impressed with what I saw. He has a good body on him (6'7", 211 pounds) and he has the ability to stroke it from deep, averaging 14.8 points per game on 44.1% shooting from 3-point range during his senior year at Stanford. Anthony Brown is a guy who I expected to get drafted in 2015 and I was certainly not at all surprised to see him go as high as he did. He has all the tools to be an NBA player and just needs to find the right place in order for him to succeed.

I am confident that with the Erie BayHawks, Anthony Brown will have a very productive season and prove himself worthy of an NBA call up. He's already off to a great start, scoring 31.5 points per game on 66.7% shooting from 3-point range in 7.5 3-point shot attempts per game. In addition to popping 3s, Brown is getting to the rim well and really showing off his full repertoire. He's throwing it down in transition, finishing well around the basket, etc. Anthony Brown is getting the chance to be the feature player with the Erie BayHawks and is so far making the most of the opportunity.

If you are looking for players to monitor in the NBA Development League, Anthony Brown is definitely one of those guys to keep a close eye on. He's a truly NBA level talent that has all the pieces to be a rotation NBA player given the right situation. Look for him to shine with the Erie BayHawks and be back in the NBA in the very near future.