Saturday Slam: Should NBA championship teams boycott trips to the White House during the Trump administration? 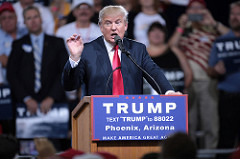 Earlier this week, the Milwaukee Bucks, Dallas Mavericks, and Memphis Grizzlies all made the decision to not stay in Trump Hotels when their teams play against the Knicks and the Nets in New York.  This is a great way for these teams to protest against the Trump Administration since it is peaceful and powerful at the same time. With the NBA being such a progressive league that stands up for the rights of the LGBTQ community and stands up against any form of discrimination, one has to wonder whether or not NBA championship teams will visit the White House during a Trump administration.

The NBA has done a great job at using its global platform to raise awareness about environmental issues, health issues, and also issues surrounding equality and discrimination. With that in mind, the NBA would really send a message if their championship teams elected to not visit the White House during their visit(s) to DC to take on the Washington Wizards.

For those of you who may not understand the gravity of an NBA boycott of the White House, what needs to be understood is that as far back as I can remember, NBA championship teams have made it a tradition to visit the White House the following season. They've always made it a priority to visit the White House and give the president a jersey with his name on it. The president makes a few jokes, the players make a few jokes, they embrace, they have a good time, etc. But with the NBA being such a diverse league with players from all racial makeups, nationalities, and backgrounds, I'm not sure it's possible for NBA championship teams to have a "good time" when visiting Trump in the White House.

Going a step further, what message could it send to the fan base of a respective team to see Trump's name on the back of their team's jersey? Might it offend them? Might it not make them want to come to the games? Might it hurt the fan base?

The answer to these difficult questions is that it could and perhaps therein lies the answer. The NBA is about making all of its fans feel safe and comfortable coming to the games. If seeing their favorite players shake hands with Donald Trump makes fans feel uncomfortable or angry, maybe it is just best for NBA championship teams to skip visits to the White House during Donald Trump's administration.

By not visiting the White House during a Trump administration, NBA players would be sending a strong message of solidarity to their fans that are African-American, Latino, Muslim, LGBTQ, etc. I think it would let them know that they don't stand for what this administration stands for and that they themselves are not going to be idle in letting the administration set forth racist, xenophobic, islamophobic, homophobic, and anti-environment policies. NBA fans really look up to their favorite players and by boycotting trips to the White House during a Trump administration, NBA fans would see their favorite players as guys who have their back and care about making sure they don't get left behind.