Wednesday Windmill: Is Aaron Gordon on the verge of a breakout season? 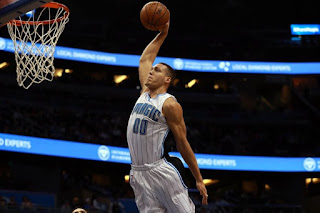 On Tuesday night, Orlando Magic forward Aaron Gordon had a monster game against the Brooklyn Nets, scoring 41 points and grabbing 14 rebounds on 14/18 shooting from the field, 8/10 shooting from the free throw line, and 5/5 shooting from three-point range. The Magic won the game 125-121, improving to 3-1 on the season.

Entering his fourth season in the NBA, the 22 year old Gordon has been viewed as somewhat of a project by the Magic organization. The athleticism has always been there, but they've been waiting for his skills to catch up. While it is early yet, Gordon appears to have flipped the switch, averaging 27.5 points and 11.5 rebounds per game on the season during the two games that he has played.

When looking at his stat line against the Nets, what's most frightening is the 5/5 shooting from three-point range and 8/10 shooting from the foul line. When you combine freakish athleticism with that kind of shooting, you have a player that is virtually unstoppable. There's no way for defenses to contain a combination like that. Pick your poison, inside or out, you're going to get burned.

If Gordon keeps this up, he will have a breakout season of epic proportions. The question of course is whether or not he can sustain this for the duration of the season. Personally, I'm optimistic that he can. I was very high on Gordon when he entered the 2014 NBA Draft because of his motor and athleticism. He seemed to have all the pieces needed to be a star in the league. It was just a matter of being patient and letting him develop.

While we are still early in the season, the Orlando Magic have to be excited about what they're seeing from Aaron Gordon thus far. They drafted him with the hopes of him being their franchise player and so far, he's delivering the goods. If he keeps this up, there's no reason to doubt their chances of becoming a serious force in the East.