Wednesday Windmill: Is Ben Simmons worth a max deal? 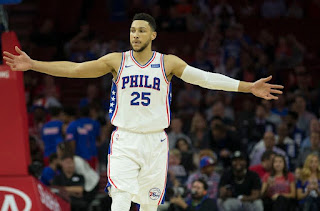 
The big news out of the NBA this week is the Philadelphia 76ers and Ben Simmons agreeing to a five-year, $170M max contract. Simmons is coming off his first All-Star season in which he played in 79 regular season games averaging 16.9 points, 8.8 rebounds, 7.7 assists, and 1.4 steals per game. The only real knock on his game at this stage is his lack of an outside shot. In 17 3-point shot attempts in his career, Simmons has made zero. That's right, he is yet to make a 3-point shot in his career. So that part of his game definitely needs to improve.

Aside from his perimeter game, which needs to get to the level of respectable, there's a lot to like about Simmons. He's a 6'10", 230 pound point guard that knows how to create plays for his teammates, finish around the rim, rebound, and force turnovers. He's basically the closest thing we have to a LeBron James 2.0. On top of that, he's just 23 years old. When you are as young as he is and already playing at such an elite level, you are worth every penny a max contract can offer.

Now, a lot of why Simmons is getting this money is because of what he is projected to become. He is by no means a finished product. I've already touched on the 3-point shooting, but there are other areas of his game that need improvement. His foul shooting (58.3% for his career) is awful and he turns the ball over too much (3.5 turnovers per game). If he can become a better 3-point shooter, foul shooter, and improve his ball security, he'll truly take his game to new heights.

Assuming he is able to improve his game and become a better shooter, the 76ers are doing the right thing by giving Ben Simmons a max contract. He's got plenty of time to improve and is already one of the top players in the league. If he puts it all together, the 76ers could be looking at multiple trips to the NBA Finals. He's that special of a talent.