Tomahawk Tuesday: The Trail Blazers are securing their future 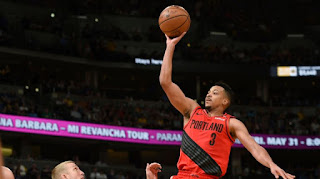 Earlier today, ESPN's Adrian Wojnarowski broke the news that the Portland Trail Blazers have inked their star shooting guard C.J. McCollum to a three-year, $100M extension, giving him a five-year, $157M contract that keeps him in Portland through the 2023-24 season. This extension comes after Damian Lillard's five-year, $196M max extension, which keeps him in Portland through the 2024-25 season. By inking both of their star guards to long-term contract extensions, the Trail Blazers are securing their future.

This past season, the Trail Blazers made an impressive run to the Western Conference Finals before getting swept by the Golden State Warriors. Had Jusuf Nurkic been available, that series may have been pretty competitive. I'm not saying the Trail Blazers would have won, but instead of it being a sweep, it could have been a series that went six or seven games.

With the Warriors' dynasty appearing to be on the brink of extinction due to the departure of Kevin Durant and the torn ACL of Klay Thompson, the Western Conference is wide open, giving a team like the Trail Blazers a unique opportunity to make a run to the NBA Finals. These windows don't last long and the Trail Blazers know it, thus their efforts to secure McCollum and Lillard.

I'm still undecided of as to who I think comes out of the Western Conference next season. The Clippers are the easy choice after landing Kawhi Leonard and Paul George, but first year experiments don't always work out. I think it's possible the Clippers don't do as well as everyone expects. If they fall short of expectations, then it really is anyone's game. Including the Trail Blazers.

The bottom line is the Trail Blazers are giving themselves a shot to win a championship by securing one of the most electrifying backcourts the NBA has ever seen. Together, C.J. McCollum and Damian Lillard can take this Trail Blazers team to the promised land. Especially as their front office continues to put quality pieces around them.