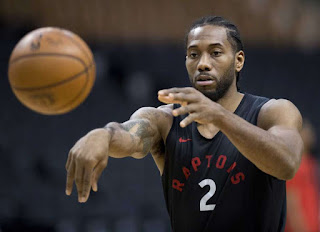 On Friday night, I wrote a blog post for Saturday all about why Kawhi Leonard should stay in Toronto, why he would be foolish to leave behind a situation where he is the toast of the city and hero to all of Canada and then boom! News broke that Leonard was joining the Los Angeles Clippers! Even more amazingly, news subsequently broke that Paul George will be joining him as a result of being traded from the Oklahoma City Thunder in exchange for Shai Gilgeous-Alexander, Danilo Gallinari, four unprotected first-round picks, one protected first-round pick, and two pick swaps. The Clippers have also waived Tyrone Wallace as a result. Adrian Wojnarowski of ESPN has the details below.


With Leonard and George, the Clippers have a legitimate one-two punch that has the chance to win a championship. Aside from the photo, the one vestigial remain of my original Saturday Slam post for this weekend is that the Clippers are a better choice for Leonard than the Lakers.

The first reason is because the Clippers were a better team last season. Unlike the Lakers, the Clippers actually made the playoffs, giving the Warriors a bit of a scare in the first round. The Clippers looked like a team that was going places and by adding Leonard and George, they're more than just going places. They're entering themselves into the championship discussion.

The second reason is that the Clippers will be Leonard's team. Had he joined the Lakers, Leonard would have been second fiddle to LeBron James. Or at least that would have been the perception. Instead, Leonard gets to be the the man on this new and improved Clippers team, giving him a chance to go after James and prove himself to be the superior player.

Third, there's less pressure on Leonard. The Clippers have never won a championship before and quite frankly have never come close. By going to the Clippers, Leonard is able to be somewhat in the shadows of the Lakers, something that he doesn't mind.

Fourth, as was said above, Leonard gets to play with Paul George, one of the best wings in the NBA. George should play well alongside Leonard, giving the Clippers a legit second option. Together, Leonard and George have the chance to do a lot of damage and take the Clippers to even higher heights than they achieved during the Chris Paul/Blake Griffin era.

I will later address what this all means for the Oklahoma City Thunder and Toronto Raptors, but for now, I want to focus on the Clippers. For them this is huge. They're in the game now and a real threat to win the NBA championship. On top of that, they're set to form a really fun crosstown rivalry with the Lakers, something that is certain to boost ratings across the league. As exciting as this past NBA season was, I'm already eager to see what next season has in store.