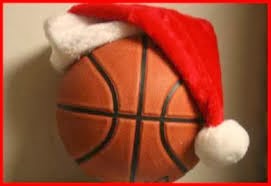 For die hard NBA Basketball fans, Christmas Day is a fun day purely because it is filled with NBA basketball; for casual fans it's sort of the day that the NBA season kicks off. So if you are one of the die hard NBA fans, this article isn't really for you to read, although you will still enjoy reading it! This is for the casual fan who wants to know "What should I look for with these games? Why do these teams matter?" So with that, I will give you a quick preview to each game and give you reasons to watch and things to look for.

It's been a disappointing season for both the Chicago Bulls and Brooklyn Nets this season as both teams entered the season with championship aspirations and so far neither team appears to be capable of turning things around. The Bulls have lost their star point guard Derrick Rose for the season due to tearing the MCL in the knee opposite of the knee that had ACL surgery and the Nets have lost their star center Brook Lopez for the season due to a broken foot. So with both teams basically out of the championship race, why should you watch this game?

Well, for one thing, both of these teams faced off in the playoffs last year and it proved to be quite a battle that resulted in the Bulls advancing to the second round of the playoffs. The Nets will be out for some revenge and the Bulls will be out to show that they still won't go down without a fight (more of their motto for the season than for just this game).  Secondly, Nets head coach Jason Kidd just came out and said "We're getting really close to just accepting losing." It'll be interesting to see if his team responds to his harsh words and plays well, or if they play uninspiring basketball again and let down the Brooklyn fans on Christmas Day. Lastly, Bulls head coach Tom Thibodeau always has the Bulls play tough and play as a team. It's always fun to watch quality team basketball in today's NBA that isn't predicated on star play, but predicated on defense, rebounding, and hustle.

Unlike the previous game, this game features a team that is a championship contender. That team would be the Oklahoma City Thunder. The New York Knicks on the other hand have been a disaster so far this season. They have shown utterly no ability to form a cohesive unit. It's basically been Carmelo Anthony jacking up 30 shots a game to keep the team within 5 points at the end of the game. Amar'e Stoudemire hasn't been healthy and he hasn't been playing anywhere close to where he used to be when he was an all-star, and the additions of Metta World Peace and Andrea Bargnani haven't exactly given the team the kind of boost they were hoping for. For the Knicks, beating the Thunder on Christmas Day would be a small step forward towards showing that they aren't totally dead this season.

Like the previous game, this game has one contender (Miami Heat) and one team that isn't (Los Angeles Lakers). The Lakers were hoping to have Kobe Bryant back for Christmas Day, and while he returned before Christmas, he has gone down with a fractured left knee that will keep him out for several weeks. The Lakers are also without Steve Nash, and Pau Gasol remains the only really recognizable player on this team to the casual basketball fan that is actually able to play today.
The only thing to look for when it comes to the Lakers today, is to see if Mike D'Antoni has the ability to get these guys to play above their level of expectation like Tom Thibodeau has done with the Bulls. Beyond that, there isn't much to glean from the Lakers. Kobe is out and even when he's healthy, they aren't contenders anyways.

As for the Heat, the thing to look for will be kind of along a similar vein as the Thunder. Look for them to remind us of why they are a contending team (back-to-back champs)  and why LeBron James is the best player in the NBA. An easy and sound drubbing of the Lakers would be reminder to us that the Heat are still the team to beat in the NBA, but it wouldn't teach us anything new.

In short, there isn't much to take away from this game. The Heat are contenders and they don't need to prove that to us today, though they can remind us of that; and the Lakers are clinging to a position where they can maybe make a playoff push when Kobe comes back.

Finally, we have game that features two teams that actually are in the championship picture!! The San Antonio Spurs are once again flying under the radar with an impressive record and winning in a wide variety of ways thanks to their hall of fame players Tim Duncan, Tony Parker, and Manu Ginobili and their hall of fame coach Gregg Popovich. The Spurs are sure to be a tough out come playoff time and still probably are my pick to win the Western Conference and get back to the NBA Finals. Look for the Spurs to put on another exhibition of high quality basketball with off the ball screens, and passes that accurately hit cutting players. That is how basketball is supposed to be played!

As for the Rockets, look to see how Dwight Howard fits in with his new team. The Rockets have high hopes for their season, and believe that they have a contending team with the arrival of Dwight Howard. A win against the Spurs today would be a big win for them since it would send a message that they are a serious contending team. The Spurs are the standard in the West, and if you can beat them on the road in San Antonio, you can beat any team anywhere. This is by far the biggest game today in terms of indicating where teams are in the championship picture. If the Rockets win today or even if they play the Spurs close, we'll have to take the Rockets seriously going forward. If the Rockets get stomped, it won't mean that they can't compete or contend, but it will mean that they are still much more of a work in progress.

This is by far the most entertaining game of the day, which is why I'm glad it's last! The Clippers have high flyers Blake Griffin and DeAndre Jordan receiving lobs from their star point guard Chris Paul and the Warriors have perhaps the best 3-point shooting backcourt of all-time in Stephen Curry and Klay Thompson. The "Splash Brothers" as they are called can shoot from literally anywhere on the court and seem to shoot with more confidence than anybody else in the league. The point is, if you like offense, you'll love this game!!! This is the exact opposite of the Bulls-Nets game to start the day. There will be tons of scoring, dunks, and long-range shots in today's Clippers-Warriors game!

As for what this game means for championship ramifications, both these teams are expected to be capable of making a deep run in the playoffs later this season. The Clippers have a legitimate MVP candidate in Chris Paul who will want to show today why he is a worthy MVP candidate and the hands down best point guard in the NBA. The Clippers have looked really strong this year and are in good positioning already. With this game on the road and the Warriors being behind the Clippers in the standings, this game means a lot more for the Warriors than it does for the Clippers. The Warriors will want to win this game to show that they still belong in the same conversation as the Clippers and that while they don't have Blake Griffin and Chris Paul, they do have guys that can hold their own in Stephen Curry, Klay Thompson, and Andre Iguodala.