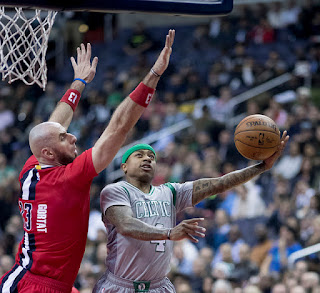 During the past few seasons, we've gotten pretty used to hearing LeBron James, Stephen Curry, Kevin Durant, Russell Westbrook, and James Harden mentioned in the NBA MVP conversations. While this year is no different in that those same names are once again being mentioned, a new MVP candidate has emerged in Boston Celtics point guard Isaiah Thomas, who is averaging 29.1 points and 5.9 assists per game on 46.2% shooting from the field, 37.9% shooting three-point range, and 91.1% shooting from the foul line.

Thomas, in his sixth season out of Washington, has the Celtics currently atop the Eastern Conference standings, posing to LeBron James the biggest threat in the Eastern Conference since the days when Paul George and the Indiana Pacers were contenders. While it is unprecedented to see a 5'9", 185 pound MVP candidate, Isaiah Thomas deserves such recognition for the way he has led his team throughout the season.

If there is one stat I can point to that best proves his MVP candidacy, it's that Isaiah Thomas leads the NBA in 4th quarter scoring. Thomas is showing that he can step up in crunch time as well as anybody in the NBA, which makes him an MVP candidate by default. When looking at what separates stars from the rest of the field, late game heroics and 4th quarter performances are what we first look to after glancing at the overall stats. When we think of Michael Jordan, Kobe Bryant, Magic Johnson, and other legends of the game, we think of their game winners and ability to take over games during the final minutes. By establishing himself as the best 4th quarter scorer in the NBA, it would be ridiculous for us to not mention Thomas as a serious MVP candidate.

In addition to his 4th quarter heroics, if you simply look at what Isaiah Thomas is doing as a whole, it's pretty obvious that he should be in the MVP conversation. He's getting close to 30 points per game and has his team in the driver's seat for the top seed in the Eastern Conference playoffs. While he has gotten some help from the likes of Avery Bradley and Al Horford, the Boston Celtics really is the Isaiah Thomas show. Without him, this team would be fighting for an 8 seed instead of the top seed in the conference.

When looking at his complete resume, it is clear that Isaiah Thomas is a strong MVP candidate. He's got the stats, the clutch factor, and he's got his team in a position to make a deep run in the playoffs. I certainly hope that when the MVP voting gets revealed, we'll see that Isaiah Thomas was given the proper consideration for the award that he deserves.

To connect with NBA Lord on Google Plus, click here.
Posted by Ben Parker at 6:06 PM