Saturday Slam: The Houston Rockets would be crazy to trade Russell Westbrook 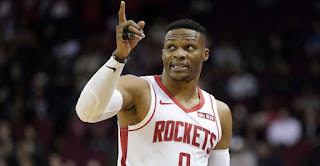 
Rumors have been swirling about the 21-10 Houston Rockets possibly trading Russell Westbrook. I don't know what the basis of these rumors are, but let me just say that if the Rockets did make such a move, they would be crazy to do so.

For starters, they just got Westbrook. They're not even half-way through their first season with him. It's way too early to tell whether or not he'll be the desired upgrade over Chris Paul that they were hoping he would be. When the whole reason for why you got him was to possibly win a championship, it would be foolish to trade him before you even play one playoff series with him.

Secondly, Westbrook is playing pretty well, averaging 24.1 points, 8.1 rebounds, 7.1 assists, and 1.5 steals per game. Those are very good numbers. It's not like he's stinking up the joint. He's bringing his hard hat to work every day and for the most part is doing everything one would expect from him.

Finally, the Rockets are right in the mix for the top seed in the Western Conference, just three games back of the 24-7 Los Angeles Lakers. If the Rockets were hovering around .500 and looking like a team that might miss the playoffs, maybe it would make sense for them to pull the trigger on such a move. Given they have a 67.7% winning percentage and are in the mix for the top seed in a very competitive Western Conference, it's hard to see a good reason for them to blow things up.

All of this is to say that the Rockets would be crazy to trade Russell Westbrook and I don't put much stock in these trade rumors. No situation is perfect and there's always going to be second guessing about offseason moves. But with how things are going, the Rockets don't have much reason to second guess the addition of Westbrook, making rumors of him being being traded likely ridiculous.