Tomahawk Tuesday: How will the return of De'Aaron Fox and Marvin Bagley III affect the Sacramento Kings? 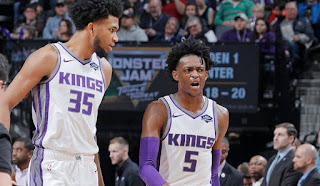 After both being out for an extended period of time due to injury, De'Aaron Fox (18.2 points & 7.0 assists) and Marvin Bagley III (13.0 points & 7.3 rebounds) are back for the Sacramento Kings. Tonight, the Kings lost on the road at Charlotte, but got solid production from their two young stars off the bench. Fox finishing with 19 points and 8 assists and Bagley finishing with 14 points and 7 rebounds.

At this moment, the Kings are 8th in the Western Conference standings with a 12-15 record. Considering that they are currently in the top eight despite having gone without Fox and Bagley for most of the season, the Kings should feel good about how their season has been going. It stands to reason that with them now back, the Kings shouldn't just be eying a playoff berth, they should be looking to climb up the Western Conference playoff ladder.

In addition to having Fox and Bagley back, the Kings also have the advantage of a favorable home schedule. Of their first 27 games, they've only played 11 games at home and will play two more road games at Indiana and at Memphis before returning home to face the Rockets on December 23rd. That means that of their first 29 games, 18 of those games will have been on the road. For them to navigate such a tough early schedule without Fox and Bagley is pretty impressive and should give them a lot of confidence.

That all said, climbing up the standings won't be easy for this young Kings team. The Suns, Trail Blazers, and Timberwolves are all nipping at their heels and it's not like the Jazz, Rockets, and Nuggets are just going to go belly-up. The Kings will have to earn it.

Over the next several weeks, we're going to find out what this Kings team is really made of. They've weathered a tough storm and now have two of their better players returning with a favorable home schedule. If they can't take advantage of what they have in front of them, this is going to be a really disappointing season in Sacramento.

To connect with Ben Parker, click here.
Posted by Ben Parker at 7:40 PM