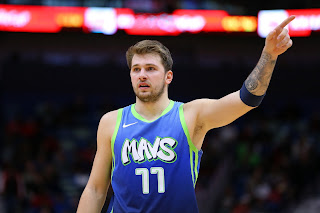 On Sunday, Dallas Mavericks superstar Luka Doncic finished with 27 points, 7 rebounds, and 8 assists in his team's 110-106 loss to the Sacramento Kings. While his team lost the game, he did surpass Michael Jordan for most consecutive games with at least 20 points, 5 rebounds, and 5 assists since the NBA/ABA merger. Jordan's record was 18 games and Doncic now has 19 games achieving the feat. For your reference, Oscar Robertson had 29 games of 20/5/5, but it was before the merger.

Scottie Pippen, who has turned into an apologist of sorts for his 90s Bulls teams, made a statement to TMZ about how Doncic can't be compared to Jordan because he doesn't have six rings: "He got six titles yet?!" The question Pippen was asked was whether or not he sees any of MJ's game in Doncic. It's actually a pretty fair question. Instead of giving a good response, Pippen gave one of his pompous "I'm not the GOAT, but I played with the GOAT, so that makes me more important than you and your silly question" answers. It's annoying. I understand MJ is the greatest basketball player of all-time, but that doesn't mean he can't ever be compared to anybody.

Look, it's highly unlikely that anyone will come along who matches MJ's overall impact on the sport. A major reason for that is timing. MJ came along in an era in which the NBA had most of its fan base in the United States. Thanks to him, the NBA became much more popular worldwide. No matter how good someone else is, they'll never be able to replicate that same impact. On top of that, it's highly unlikely, though not impossible, that someone else will lead a team to six NBA championships in the same decade without losing in the finals. Maybe someone will come along and win seven, but the odds of that are really low.

That isn't to say Doncic can't put his own stamp on basketball. We need to stop looking for the next Michael Jordan because there's only one Michael Jordan. We need to instead appreciate what other great players bring to the table and cherish what they're accomplishing.

While he isn't Michael Jordan, Luka Doncic is damn good. He's one of the most versatile players we've seen and he's only in his second season. So long as he keeps playing like he is, he'll make the Basketball Hall of Fame and go down as one of the greatest, if not the greatest player of his generation. As tempting as it is to compare him to those that came before him, we need to do our best to live in the present and admire what he's doing for its own sake.