The Playoffs Start Now For Miami And Indiana 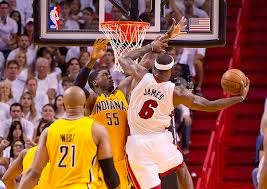 With the NBA playoffs starting in only a couple of weeks, we are entering the time of year in which regular season games suddenly appear to matter.   I say "appear" only because all games in the regular season matter equally as far as the standings are concerned. It isn't as if winning in April magically is worth two wins whereas a win in November is only worth one win. But it is fair to say that the effect of winning and losing is noticed much more strongly at this time of year. With that in mind, I will address the current state of the Miami Heat and Indiana Pacers, two teams which are the clear powerhouses of the Eastern Conference. People try and talk up the Brooklyn Nets, Chicago Bulls, and even the Toronto Raptors and try to convince us that those three teams might make the NBA Finals or at least knock off either the Pacers or the Heat en route to the Eastern Conference Finals. I will try and set the record straight for all of you who are getting confused by this idle chatter.

The Eastern Conference isn't a three horse race, a four horse race, and not a five horse race. It is a two horse race between the Indiana Pacers and the Miami Heat, and all the other six teams that will make the Eastern Conference Playoffs are just there for show. None of them have any remote chance of reaching the NBA Finals or even getting past either the Heat or Pacers.  I think that what will likely decide the projected Heat-Pacers series in the Eastern Conference Finals is home court advantage. Since the only way for the Heat and Pacers to affect who gets home court advantage is to win games between now and the end of the regular season, I argue that as far as the Heat and Pacers are concerned, the playoffs start now.

Both of these teams have been struggling as of late. The Heat went 10-8 during the month of March and the Pacers went 8-10, which included a 4 game losing skid, and concluded on a 3 game losing skid which continues as they roll into April. While the Heat are instead on a 3 game winning streak instead of a 3 game losing skid, lets not kid ourselves and ignore the fact that they too have been playing poorly during this past month. The bottom line is that both teams played in the month of March like they didn't care anymore about the regular season, but the irony of it is that this is the time of year that they should be playing their hardest to win games.

As it stands now, both teams are tied in the standings, with the Pacers having played 2 more games than the Heat. That means that the Heat have more games to get things sorted out and the Pacers have fewer games to do so. Which ever team has a better month of April will get the #1 seed in the Eastern Conference playoffs, which means that the route to the NBA Finals will go through their building. If the Miami Heat get the #1 seed in the Eastern Conference playoffs, we might as well send them straight to the NBA Finals. I don't see any way that the Indiana Pacers get to the NBA Finals without home court advantage. Especially since they have been playing like absolute garbage during the past month. What's worse is that the Pacers had the home court advantage and booted it away due to what Roy Hibbert calls their own selfishness. That selfishness was manifested the other night when George Hill and Lance Stephenson had to be separated from each other on the bench because they were squabbling over something petty. The only thing at this point that can prevent the Pacers' problems from trickling into their post-season play is if they still hang on and get the #1 seed. If the Pacers get the #1 seed in the Eastern Conference playoffs, then the Pacers can mentally hit the reset button. They can all give each other a big group hug, sing "Kumbaya" around a campfire, and get over the problems if they get the #1 seed in the Eastern Conference playoffs. They can still feel like they accomplished their goal and have had a successful regular season if they hang on to the top spot. More importantly, they can still feel confident in their ability to reach the NBA Finals and fend off the Heat. Especially since the last time the Heat came into their building, they came out victorious.

In order for the Heat to steal the #1 seed from the Pacers, they are going to need LeBron James to play like the MVP during the month of April. He's so dominant that if he plays like his MVP self, I don't see any way the Pacers hang on to the #1 seed. As for the Pacers, since they don't have that definitive superstar like LeBron James, it's going to have to be a group effort on their part. I know Paul George is their "superstar" and he can play like one in stretches, but his play isn't consistent enough that one can bank on him to play like a superstar every night. Hence, it needs to be a group effort on the Pacers' part. In addition to Paul George playing well, they need Roy Hibbert, David West, George Hill, and Lance Stephenson to all play better. If all those guys play well for the Pacers (which means they get over their problems in the locker room), then the Pacers will have a chance to re-right the ship and reclaim the #1 seed in the East. 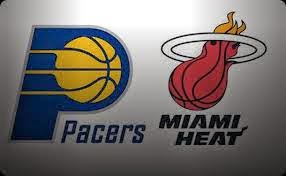