Saturday Slam: Can Kyrie Irving lead a renaissance in Brooklyn? 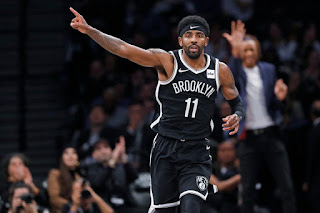 Kyrie Irving is starting a new chapter of his career with the Brooklyn Nets and so far, it's going pretty well for him. In his opening game with his new team, he put up 50 points, 8 rebounds, and 7 assists in a 127-126 overtime loss to the Minnesota Timberwolves. In his second game, he put up 26 points and 5 assists in a 113-109 win over the New York Knicks. With Kevin Durant out for the entire season, the Nets will be relying heavily on Irving to carry the load and so far, he appears to be up to the challenge.

Since moving to Brooklyn, the Nets have struggled to find an identity, which is somewhat ironic given that the very reason they moved to Brooklyn was to find one. After going through several different possible faces of the franchise (E.g. Deron Williams and D'Angelo Russell), the Nets are hopeful that they finally have the right pieces to have a championship contending team.

While this year will not yield championship fruit due to Durant's absence, it is possible that Irving will be able to lead a renaissance of sorts in Brooklyn, giving the Nets a new lease on life. He's always wanted to be the face of a prominent franchise and this is his chance to be one. In Boston, he had to share the spotlight with Gordon Hayward, Jaylen Brown, and others, but this time it really is his team.

If he can't get it done in Brooklyn, he might as well pack it up and call it a career. Or move to China and lead the Beijing Ducks to another championship. Both options will be on the table.

When talking about stories to follow in the 2019-20 NBA season, how this new look Nets team does will be something to monitor. Especially with Irving as their new face. The NBA desperately wants competitive basketball back in the Big Apple and with the New York Knicks remaining a giant question mark, the Nets are their best bet to bring some real buzz back to the region. At least in the near future.