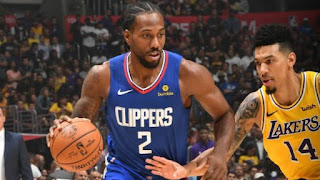 On opening night, the Los Angeles Clippers defeated their crosstown rival Los Angeles Lakers 112-102 behind 30 points, 6 rebounds, 5 assists, 2 steals, and 1 block from Kawhi Leonard. Even though it was just one game, the Clippers sent an early message to the Lakers by winning this game. Especially since Paul George (shoulder) did not play.

To a large extent, there was a lot of mystery going into this game considering the fact that both teams have rebranded themselves. The Clippers have added Leonard and George while the Lakers have brought in Anthony Davis, Danny Green, and others to join LeBron James. Both teams expect to make deep playoff runs and contend for the NBA championship as a result of their offseason moves. Given that both teams have a lot of new pieces, what we saw tonight is just a prelude to what we'll see come May and possibly June.

That all said, it's still huge for the Clippers to win this game considering the rivalry that they have with the Lakers. By winning tonight, they set the tone for the rivalry and made it clear to the rest of the Western Conference in the process that they are indeed a legit threat to win the conference despite having a ton of new pieces. Once George comes back, that should take them to another level, which is kind of scary to think of.

As for the Lakers side of this, they have to brush this off as one game and remind themselves that they too were short handed as Rajon Rondo and Kyle Kuzma were both out. On top of that, they're still figuring out how to get their pieces to work together and that come the second half of the season, they're going to look a lot more cohesive.

Overall, tonight was a good night for the NBA. The Clippers and Lakers played a hard fought game, showing that their rivalry should be fun over the course of this season and possibly beyond. The NBA has been stagnant when it comes to rivalries over the years, so this should give the league a nice little pop during the course of the regular season and hopefully the playoffs.

To connect with Ben Parker, click here.
Posted by Ben Parker at 11:09 PM