Wednesday Windmill: Are the Boston Celtics taking a big risk on Jaylen Brown? 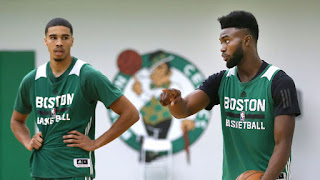 Earlier this week, it was announced that the Boston Celtics and fourth-year small forward Jaylen Brown agreed on a four-year, $115M contract extension. The deal was reached after Brown initially turned down a four-year, $80M extension, citing a belief that he could earn more in the open market. Brown's decision to turn down the Celtics' initial offer paid off handsomely for him as he earned another $35M.

While this deal is clearly good for Brown, what's up for debate right now is whether or not this deal is good for the Celtics. They already have Kemba Walker and Gordon Hayward signed to max contracts and third-year small forward Jayson Tatum likely demanding a big contract a year from now. They have a logjam at small forward and it stands to reason that they can't keep everyone happy both with how they're getting paid and how they're being used. There's only so many minutes in a game and it's hard to play Hayward, Tatum, and Brown together.

If you look at how Brown has performed over his first three years in the NBA, he's been solid, averaging 11.2 points, 4.0 rebounds, and 0.8 steals per game. While he still has a lot of room for growth, he has overall backed up the Celtics' decision to draft him third overall in the 2016 NBA draft.

During his freshman year at Cal, I was around Brown a lot thanks to my gig covering Cal basketball for Rivals.com. It was clear from his first game at Cal that he was a supremely gifted athlete and that it was just a matter of time before he would put all the pieces together. While he hasn't put all the pieces together yet, it would be foolish to not think he'll get better. Especially since he's turning 23 tomorrow. He's still very young with a ton of upside.

Given all that, I don't think it's crazy for Brown to get the contract that he did. He keeps getting better and is also a really smart, articulate guy that brings a lot to an organization both on and off the court. The Celtics do have to figure out what to do with Tatum and Hayward as well, but I think if they had to let one of them go, Hayward would be the one. He's the oldest and has already been through a really gruesome injury. The smart move for the Celtics might be to actually move Hayward for more assets and really build around Tatum and Brown. Together, those two could form a really dynamic duo over the next decade. Of course, they could also try to keep all three and see if they can co-exist for the long term. I'm skeptical that they can, but perhaps they'll prove me wrong.

Overall, I do think the Celtics made the right decision in giving Jaylen Brown his money. He's one of the most talented young players in the NBA and provided he continues to grow like he's projected to, they'll get their money's worth. That I'm confident of.