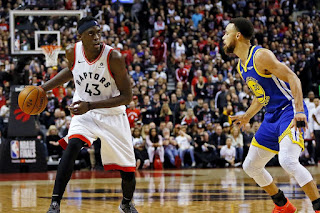 Shams Charania of The Athletic is reporting that four-year power forward Pascal Siakam is seeking a max contract extension from the Toronto Raptors. After averaging 7.3 points and 4.5 rebounds per game in his sophomore season, Siakam had a breakout year last season, averaging 16.9 points and 6.9 rebounds per game, establishing himself as one of the top power forwards in the NBA.

With Kawhi Leonard gone and Kyle Lowry getting older, the Raptors need a new piece to build around, making Siakam a no-brainer candidate to fill that void in the coming seasons. He's young, athletic, and evolving into a really nice stretch forward. If they don't lock him up, their future becomes a lot more uncertain.

One of the things I've wanted to address on this blog is that even without Leonard, this Raptors team is still really good with Lowry, Siakam, Serge Ibaka, Fred VanVleet, and Marc Gasol.  When talking about who could come out of the Eastern Conference next season, don't sleep on this Raptors team. They still have a lot of dangerous pieces.

Going back to Siakam, as I said earlier, he's the best piece that they have to build around for the future. At just 25 years of age, he has a lot of room for growth. If he doesn't get offered a max extension from the Raptors, some other team will likely offer him one instead. The Raptors need to listen to his demands and give him what he wants. If they don't, they're going to regret it.

To connect with Ben Parker, click here.
Posted by Ben Parker at 1:59 AM