Mock Draft Monday: The Charlotte Hornets have found a gem in P.J. Washington 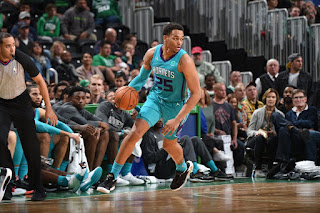 Perhaps the most surprising rookie in the NBA has been Charlotte Hornets forward P.J. Washington, who played at Kentucky. During his first three games in the NBA, Washington has averaged 15.0 points, 6.7 rebounds, 1 steal, 1 block, and 3 three-point fields goals made per game. It's been particularly fun for me to watch P.J. play well because I interviewed him when he was in high school. Back when the California Golden Bears were recruiting him. The Cal coaching staff along with many other programs really liked P.J. so in that vein it's no surprise he's finding success in the NBA. At the same time, it's always surprising to see a rookie come in and make such an immediate impact. Especially one who wasn't a top five or top ten pick.

What's been most surprising to me about Washington's performance is his 3-point shooting. I knew he was a jack-of-all-trades kind of player, but I did not know he would come in and be this good of a perimeter shooter. It's truly a testament to his work ethic that he's shooting like he is. Stretch forwards that can do a little bit of everything are really valuable in today's NBA, so if Washington continues on the pace he's on, he is certain to command a ton of money once his rookie contract is set to expire.

On top of being a great perimeter shooter, Washington appears to be bringing a ton of energy to this Hornets team. He's blocking shots, getting steals,  grabbing rebounds, etc. He's willing to do whatever it takes to help his team win and he's reaping the rewards of his efforts.

While it's early in the 2019-20 NBA season, P.J. Washington has earned the attention that he has gotten so far. He's playing hard on both ends of the floor and showing that he should have been picked higher than he was. I know everyone is penciling in Zion Williamson to win rookie of the year honors, but don't sleep on Washington. He is certain to gather a lot of votes if he continues to ball out.