Fadeaway Friday: The Sioux Falls Skyforce are off to a hot start 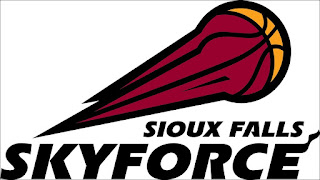 The top team in the NBA Developmental League right now is the Sioux Falls Skyforce, who are 14-4 overall, having won 8 of their last 10 games. The Skyforce are 9th in the league in scoring (108.2 points per game), 1st in rebounding (48.9 rebounds per game), 11th in assists (20.1 assists per game), and 3rd in points allowed (101.8 opponents points per game). All in all, the Skyforce are playing very good basketball on both ends of the floor and as a result, they have the top record in the D-League.

The Skyforce are led by 6'11", 235 pound center Keith Benson, who is averaging 18.3 points, 10.9 rebounds, and 3.2 blocks per game. Benson has been key to the success of this Skyforce team, producing 19.1 points and 11.1 rebounds in games won and only 15.8 points and 10.3 rebounds in games lost. The bottom line is that when Keith Benson plays well, so do the Skyforce and when he's not playing up to his best level, the Skyforce become vulnerable.

The other top players on this Skyforce team are power forward Okaro White (17.0 points and 9.1 rebounds), small forward Jabril Trawick (15.5 points per game), and point guard Briante Weber (14.1 points, 8.1 rebounds, and 6.9 assists per game). They have been producing well for this Skyforce team, giving Keith Benson the help he needs to lead this team.

Obviously, the strange nature of the D-League is such that when guys do well enough, they leave for the NBA, which is great for the players and the D-League as a whole, but not always great for the D-League team that lost the player. The good news for the Skyforce is that Keith Benson is now 28 years old and hasn't played in an NBA game since the 2011-12 season with the Golden State Warriors. He's played well enough to be a top player in the D-League, but oddly enough hasn't gotten a serious look from other NBA teams. With the way he's playing, it's possible the Miami Heat or some other NBA team calls him up, but I wouldn't bank on it. Odds are good he stays with the Skyforce for the entire season.

As for Okaro White and Jabril Trawick, neither of them has played in an NBA game and so it's hard to see either of them getting an NBA call up. It's certainly possible that their time is coming, but at the moment, I see them also sticking in the D-League and not making the jump to the NBA.

Briante Weber however has played in 7 NBA games in total and he played in two NBA playoff games last season for the Miami Heat getting garbage minutes but still playoff minutes nonetheless. Briante Weber appears to be the most likely guy to get an NBA call up since he's the guy who has most recently been in the NBA, but at the moment, he's not lighting it up like most NBA call ups need to be doing. So, I would say that he too stays in Sioux Falls for the rest of the season.

I guess what I'm trying to say is that at the moment, the core four of this Sioux Falls Skyforce team is on track to stay in the D-League the entire season which means that barring a trade, they'll remain in Sioux Falls for the rest of the season. This is obviously great news for the Skyforce's championship hopes. The fact that they are the top team in the D-League without having much risk of losing anybody to the NBA indicates that they should be favored to win the D-League championship. It will certainly be interesting to see if the Skyforce continue to keep up their successful play and also whether or not Keith Benson, Okaro White, Jabril Trawick, or Briante Weber get an NBA call up at some point in the season.

To connect with NBA Lord on Google Plus click here
Posted by Ben Parker at 8:04 PM