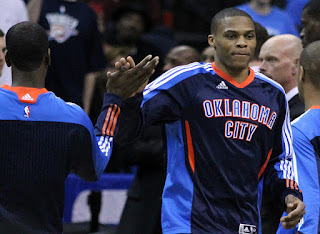 Through 24 games, Russell Westbrook has the Oklahoma City Thunder off to a solid 15-9 start while also averaging a triple-double on the season with 31.1 points, 10.9 rebounds, and 11 assists per game. During this season, he has had seven straight games with a triple-double, which matches Michael Jordan's impressive triple-double streak in 1989.  This is simply historic stuff from Russell Westbrook, who has a frightening combination of size, speed, and freakish athleticism to go along with fantastic all-around skill.

Russell Westbrook has evolved into a complete basketball player that does it all. He scores from anywhere on the floor, he attacks the rim with reckless abandon, he defends at a high level, and he creates for his teammates. There really isn't anything he can't do right now and that's a problem for teams that are going up against him.

When watching Russell Westbrook play, he truly looks like a video game brought to life. He has no problem making pull up jumpers from beyond the arc, dunking in a guy's face, or making some ridiculous acrobatic shot look easy. His game is so fluid right now that it almost seems impossible. There are moments when watching Russell Westbrook that you are just in awe of what he's doing and you can't help but wonder if what you are watching is a human being or a machine.

As one who loves the NBA and watching basketball being played at its highest level, I hope Russell Westbrook continues his high level of play. It's fun to watch the very best players in the world play at the highest possible levels and Russell Westbrook is doing just that. We may never see another guy put up numbers like this with regularity for quite a while, so I suggest that all NBA fans sit back and enjoy the special show that Russell Westbrook is giving us on a nightly basis.

Click here to connect with NBA Lord on Google Plus.
Posted by Ben Parker at 10:29 PM