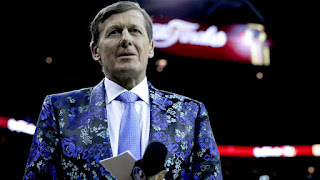 Earlier this week, the NBA lost an important member of its family in Craig Sager, who passed away at the age of 65 after a long battle with leukemia. Craig Sager has been a staple of my NBA experience for as far back as I can remember. When I think of the NBA on TNT, I immediately think of Craig Sager. The two are inseparable for me and so to have him gone just feels weird. I feel like there's a void that cannot be filled with Craig Sager gone because he was truly one of a kind.

When I was a little kid, about four or five years old, I remember asking myself, "Who is that guy wearing all the bright colored suits reporting on NBA games? Why does he dress like that?" The fact that Craig Sager's bizarre attire caught the attention of a little kid in Mountain View, California really says something. That shows how much an original he was.

In addition to being an original in his attire, Craig Sager did a superb job reporting on the NBA. He was the kind of guy that players and coaches liked to be around, which speaks volumes of the type of reporter he was. Craig Sager was a guy who they could trust and as a result, he was able to get genuine reactions from NBA players and coaches that no one else could get. Craig Sager cared about the players and coaches he was covering and it showed in how they treated him. I mean, the fact that he got Gregg Popovich to choke up pretty much says it all.

Craig Sager will forever live on in the hearts of NBA fans, players, coaches, and media members who got to watch him work his magic on the sidelines. He made the league more fun and enjoyable for everyone. He had a unique passion for the game that still burns brightly even with him gone. While he is no longer alive, we can still keep him alive in our thoughts and memories. To his family and closest friends, I express my deepest sympathies at this time and I keep you all in my thoughts and prayers. Craig Sager inspired me to follow the NBA and helped instill in me a passion for the game that will never go away.

To connect with NBA Lord on Google Plus, click here.
Posted by Ben Parker at 11:22 PM